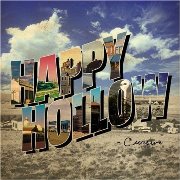 For those of you have lost track of the score at this point: Bush administration — several trillion, indie rock — two. In the span of a few months, the angst level surrounding our favorite patron saint of idiocy (let's just call him "he whose name shall not be spoken") has reached critical mass with two indie rock concept albums based in a world of neo-conservative Christian values. Which might all be well and good, but the two bands that took on the administration and the 49% of the population waiting for the rapture (no, not that Rapture) are two of my favorites for avoiding such weighty sociopolitical matters. The Thermals brought us The Body, The Blood, The Machine (and that's a story for another day) and Cursive follows suit with Happy Hollow, a fictional tale of life in a Midwestern Christian town (with allusions to "The Wizard of Oz"). It's a distinct lyrical change for Cursive, who usually care to remind us how Tim Kasher's relationship's end in a bitter, bitter fashion, but Happy Hollow is a surprising cohesive, mature, and captivating album.

The lyrics aren't the only change with Cursive since their last outing, 2003's excellent The Ugly Organ. Cellist Gretta Cohn is gone and instead they bring in a horn section to flesh out their already impressive "wall of guitar" sound. However, beyond that, the minute the crashing guitars pound out the chords in "Opening the Hymnal/Babies," you know this is a Cursive album. "Dorothy at Forty" brings us Kasher's take on midlife crisis as he wails we're not the kids we once were/we can't be the adults we want to be/dreams are all you have/dreams have held you back. It follows the Cursive pretty close, albeit with a somewhat startling (at least the first time you hear it) saxophone solo in the middle. The social commentary really kicks in with "Big Bang" where Kasher tells us that this Big Bang you might have heard about doesn't jive with Adam and Eve. Here the horns are worked into the song is a much more effective fashion, crashing their way in with the guitars and drums to punctuate Kasher's howls.

In a surprisingly effective turn, "Bad Sects" seems to borrow from Kasher's side project The Good Life, with a quiet tale told from the point of view of a morally conflicted preacher. Much like The Ugly Organ's "The Recluse," it shows how a restrained Cursive can almost be more captivating that the thrashing version. The same might be said for "Into the Fold," where Kasher's hushed vocals are surprisingly effective teamed with woodwinds and the gently plucked guitars.

"At Conception" tackles cheating, the Iraq war, teen pregnancy and town gossip with a tale of moral ambiguity. If you really pay attention to the lyrics, you can conceive all sorts of potential scandals between the guitars and horns. Cursive turns back to more familiar lyrical subjects on "So-so Gigolo" where morally corrupt lovers get their come-uppance but it lacks the a real cohesive musical mood. The missed steps on Happy Hollow tend to involve the integration of the horns, sometimes sounding lost from a Chicago album rather than something you might expect on an angry indie rock album and its especially evident on "Retreat!" where the horns sound a little to "smooth jazz" for their own good. "Bad Science" has the sound of an overly-aggressive Huey Lewis & the News.

There's a glimpse of hope toward the end of Happy Hollow (well, depending on what you consider "hope"), as "Rise Up! Rise Up!" suggests people waking up to their surroundings as Kasher sings there's more than one way to skin a religion and proclaims Rise up! Rise up! There's no one to worship. It's this seething indictment of religious life seems to go hand-in-hand with Cursive's musical style — and Kasher lives it up, alternating from whisper to howl as he calls his greatest confession I've wasted half my life on the thought I'd live forever. It's exactly the sort of song you can imagine that throngs of Midwestern youths will find quite appealing in this day and age. Happy Hollow closes with "Hymns for the Heathen" that sounds like half asking for forgiveness and half rejecting the whole religious lifestyle, underlining the contradiction of growing up in the "Blue States."

Overall, Happy Hollow works on a lot of levels without radically changing Cursive's sound while tackling any entirely different subject matter. I did miss the cello, as it was one of the strengths of The Ugly Organ and with minor exception, the horns really didn't fill in the void. However, the end result is an surprising turn for a band mostly known for its bitter and angry lovesongs rather an social commentary. I'll just look forward to the off-broadway production of Cursive's Happy Hollow …I mean, that's where we're all headed — the indie rock musical!