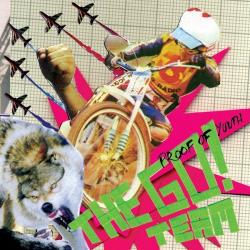 I highly doubt the Wachowski Brothers will read this review, but if they do, I have some advice for them. As you might have heard, they’re currently filming a movie version of one of my favorite childhood shows, Speed Racer (apparently using a crazy camera that keeps the ENTIRE frame in focus like a cartoon). Now, Speed Racer was ostensibly an action cartoon, but really, any time you have a monkey named Chim-Chim and a kid named Spritle you know that it doesn’t take itself too seriously. More to the point, if you were to make a movie of Speed Racer in today’s modern world in which we live, who better to do the soundtrack than the Go! Team, and Proof of Youth would be an excellent way to convince the Wachowski Brothers that the Go! Team are the team for the job.

That being said, Proof of Youth is a little disappointing after the brilliance of the Go! Team’s debut Thunder, Lightning, Strike. It's still fun like a good classic anime cartoon with a manic energy that's hard to resist, but there are a number of moments where it just seems to fall flat. There is a lack of cohesion on the album. Maybe it's just the sequencing of tracks or just the Go! Team experimenting, it's sometimes hard to believe the album is by a single group, which I suppose lends to its “soundtrack-like” appearance. However, if you liked Thunder, Lightning, Strike, you’ll probably be happy with Proof of Youth as well.

The album opens with the Go! Team sounding like what we all wish Northern State sounded like: “Grip Like a Vice” is a no-holds-barred rock-rap song that leaves you feeling so much promise for the album. This cross-pollination of modern rock and hip-hop gets amplified on “Flashlight Fight,” where we find Chuck D wandering into the Go! Team studio to record his best track in quite a few years. It's a little disconcerting to actually hear the Go! Team – Chuck D collaborating because you realize the similarities between the original Public Enemy production sounds and the Go! Team. I’m not saying they’re twins, but there's definitely a genetic connection. One of the standouts in this vein is “The Wrath of Marcie,” a track that is equal parts Jackson 5 and Luscious Jackson, with a touch of early hip-hop lyrical style – it’s a real treat.

Of course, that is not really the sound we’ve come to be used to with the Go! Team. Instead, we want the odd Phil Spector (pre-crazy)-meets-Cub sound that is both a throwback and a modern mashup. You still get plenty of that in spades, like “Doing It Right” or “Keys to the City,” tracks right out of the Pipettes playbook. A little more mainstream sounding version of this might be “Fake ID,” a song that lists much more to the Cub than the Spector side. We love the thunderous noise of the Go! Team, too, and “Titanic Vandalism” has just that – it is the “Wall of Sound” for the 21st century. The album’s closing number, “Patricia’s Moving Pictures” is textbook Go! Team, veering back and forth from a 60’s horn section to an Avalanches-like pastiche of instruments. I

’m not entirely sure what to think of some of the Go! Team’s slower numbers. They seem pleasant and all, but in a way, they come across sounding like something you’d hear on a commercial for an airline or a really excellent fabric softener. Songs like “My World” has a lot of style but the substance of a Twinkie. Others like “I Never Needed It Now So Much” or “Universal Speech” just sort of never get their acts together.

So, while I wait for the Speed Racer to come out (and likely, disappoint me greatly like the abomination that is Transformers), I can continue to close my eyes and picture what a Speed Racer movie might be like set to the sounds of the Go! Team (you can thank me later, Andy and Larry, hopefully prominently in the credits). Proof of Youth might not be the Mach 5, but the Go! Team prove that they are still clearly a demon on wheels.