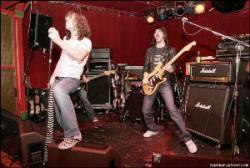 Graham Coxon, with the 22/20s and the Vacation

It's not often that we imaginary girls fear entering a club. But when we arrived to Chop Suey for the Graham Coxon show, we approached the door during openers the Vacation, and we hesitated, daunted. The windows throbbed, and despite the cold, we lingered outside, rocked by the sheer magnitude of their… well, rock.

Then we thought, "Are we not men? No, we are imaginary girls!" We charged into the pulsing sound. But our pause was our loss; the Vacation were done. Luckily our imaginary photographer of the night {Derek Pearson} was undaunted and caught on film what we now cannot describe in words.

I'm not so sure not seeing the first opener was our "loss"… don't you remember how the sheer pressure of sound coming from the club actually created a vacuum that we had to charge into? I can at least admit, even without being inside the club while they were on stage, that the Vacation are a force to be reckoned with.

Next up were the 22-20s. By all appearances, these young Brits are the next cookie-cutter, New York City-hipster-fashioned, fake accent-toting, Oasis-infused poster boys. But rather, they dare to dig deeper into their older brother's record collection and come out flip-flopping between the Yardbirds and a Jack White impersonation of Muddy Waters. They layer soulful vocals over cymbal-heavy keyboard-driven songs with intermittent country-flavored guitar riffs to prove that they are more than just four garanimal'd blokes in vintage black leather jackets.

The 22-20s completely threw me off-guard. I thought a band of nice Brit boys opening for Graham Coxon would have a nice Britpop sound. Not true though — these guys are all alt-country, twang-a-langy, pop. Look out Makers Mark, here comes the Wild Turkey!

This was the second time within one week I was surprised by the country of it all: first Henry Hanks, and now these guys. And they're Brits, for fucks sake! Normally it's the Americans who fake the British accent and affectations {and yes, I'm looking your way, Colin Meloy}.

Why are Brits trying to emulate Travis Tritt rather than Travis? I blame a Texan in the White House!

This double-twang surprise has led me to the following conclusion: Honky tonk is the new garage rock. I'm gonna print t-shirts that say so.

I wouldn't categorize this as total honky tonk. Sure, there are times when they go the way of the Willie Nelson… but they temper it with Cream and Blind Faith. They are driven by heartache without becoming melodramatic and they reach into arena rock without losing their warmth.

Warmth or not, I don't trust the twang. Or rather, maybe I trust in it too much. If my guts don't feel it, it lacks… something. It seems like disingenuous trendy twang. Their more lush, Britpop flavored songs just sounded more credible.

Ahh well. I suppose if the Thrills can play California surf music, then 22-20 can play George Thorogood. But I still say it's just weird.

Besides, what's the story with their name? Do they have some sort of super-human vision…? Or perhaps it's biblical? Maybe they are referring to Revelations:
Rev 22:20 He which testifieth these things saith, Surely I come quickly. Amen. Even so, come, Lord Jesus.

Oooh, that could be! Or maybe those hottie Brits are more into Luke:
Luke 22:20 Likewise also the cup after supper, saying, This cup [is] the new testament in my blood, which is shed for you.

Yes, Liz, maybe that's where they got their name from.

I think it would be TIG 22:20 Hallelujah, let there be Graham Coxon.

And there was! Graham Coxon hit the modest stage {by Blur standards} and blessed us with his straight forward Yankee-centric indie-rock. Recorded, Graham's songs are understated hymns for bespeckled shy boys behind record counters everywhere.

Hearing them performed at Chop Suey, his guitar prowess is undeniable and the songs take on a new dimension for me. What on the surface is subtle Pavement-esque Sebadoh-ish, I now hear moments of old-school rock functionality that make them bigger than before. To put it plainly, Graham's indie-rock guitar acrobatics up against the mammoth wave of cymbals, keyboard pounding and bass distortion make it a lot easier to overlook Graham's lesser lyrical moments {i.e. "Cinderella… Salmonella"}.

I love the Brits with their great senses of humor. At one point, some annoying drunk guys in the front {were they trying to slamdance/stage dive to Graham Coxon? I think they were!} yelled, "Play Wonderwall!"

Without missing a beat, Graham responded, "Don't display the caliber of intelligence that it took to get Bush elected for a second term." Bloody brilliant!

UGH! My face went pale when I heard that come from the mouths of arseholes {the same wankers who were screaming "Song 2" woo-hoos between the first five songs}. Score Coxon on that one.

Watching Graham live made me sad I never saw Blur in their heyday {the Think Tank tour at the Showbox in 2003 was clearly past prime}. I hate it when superstar bands with two dynamic frontmen can't keep it together to keep going as a band. In order to gauge the nature of the Graham/Damon breakup, I asked a trusted musical-genius friend (TMGF) of mine to draw comparisons.

We decided that Graham could not be the John Lennon to Damon's Paul McCartney, as Graham only ever wrote two songs with Blur. My TMGF then suggested that Graham was to Chris Walla as Damon was to Ben Gibbard {ahh, if only they had indie-rock analogies on the SATs, how much more fun those standardized tests would be!}. But since Ben and Chris are still as happily Death Cabbed as ever, that comparison didn't quite ring true.

Then I thought: Graham was the Johnny Marr to Damon's Mo
rrissey. While Graham might lack the sheer song-writing skills to produce megahits like Blur had, Damon can't truly swing it with Blur {or on his own} without the distinct expertise of Graham's guitar sound. The sum of those two has always been greater than the parts. Musical symbiosis, if you will.

True… after seeing Graham on his own, I have even a bigger hole in my heart for prime-Blur. Graham is great on his own, and I do groove out to Gorillaz remixes as much as all the other mortals, but I can't help but be reminded of the force that was Albarn/Coxon. Their ability to consistently craft intellegent britpop has been unmatched by any export of late.

In the wake, we have gotten a slew of releases from all sides, but Graham's 2004 release, Happiness in Magazines outshines them all. To solidify this, Graham played a couple of brand spankin' new unreleased songs. They proved to be the highlight of the set… they screamed of vintage punk slightly tempered with quirky pop sensibilities.

And now I find myself no longer wondering how incredible it would be to have Graham on the next Blur album. Rather, I find myself counting down to the release of Graham's next solo project and his next trip back to Seattle.