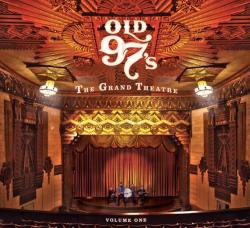 The Grand Theatre Volume One

***Come listen to this entire Old 97s record with us at this Sunday’s Imaginary Crafternoon Listening Party! Three Imaginary Girls is hosting a free, all ages Crafternoon in which we’ll plop on three brand new releases we are loving right now and work on crafts. If you’re in between craft projects or interested in a group project, we’re bringing some paper craft supplies so you can join in as we can work on holiday cards, snowflakes and the like. The Crafternoon runs from 1pm-3pm at Neptune Coffee in Greenwood. Added bonus: The Old 97s gave us a pair of tickets to their January 24th show to raffle off at this Sunday’s Listening Party!***

The Old 97s’ new album The Grand Theatre Volume One is an exceptional release due to not living up to expectations. For years, fans of these four Texans (Rhett Miller, Murry Hammond, Ken Bethea and Philip Peeples) have been hoping the band’s utterly ape-shit Replacements-at-best-level hoe-downs would translate to recordings, and it’s never really happened. A great song here and a sweaty work-out there, but not a full platter is exasperated longing to never leave its spot next to the amp.

So this time, frontman Miller has created and collaborated on a dozen delicious miniatures of modern wroking class life and love and bad luck, and this smaller-is-better approach was perfect for crafting a full-length that friskily welcomes you back like the red-headed bartender at your favorite venue who brims your glass and slaps your ass.

Like many of my favorite albums, a somewhat ordinary anthem begins things (the title track), and a clever, riffy fist-pumping bit of ‘Mats-style self-deprecation follows (“Every Night Is Friday Night (Without You)”). That song’s sarcasm and “You Can’t Hurry Love” bounce and Byrds jangle lets you know this is going to be a great “set,” especially when it spins into handclaps and shouts.

The inner core best of the record begins with “The Magician,” a list song about intelligence-insulting con men and ordinary hustlers of the everyday contrasting with the Miller’s exuberant sincerity (he’s not singing a “pop song that’s trying to play you”). Every-now-and-then vocalist Murry Hammond takes “You Were Born To Be In Battle” as a “whatever doesn’t kill us makes us more ornery” ode to change with the “open road” to “gaze at the drop of the empty miles below you.” In a more adult, stoic way, leaving “behind the dreams of youth,” this is the same song as The Clash’s “I’m Not Down.” It’s certainly tough and sweet enough to be strummed out by Joe and Mick if one had lived long enough and the other was back with him after soaking up a pile of Cash, Nelson, and other C&W greats.

But for the most part, The Old 97s stick to punky, bluesy power pop this time out, Miller’s voice never having been better, which is saying 16 tons since they’ve been driving it near-nightly and album after album for almost 20 years. Great lines like “I am in love with whoever you are” in “The Dance Class” show the desire for compromise while trying to reach what is desired by grown-ups. The blissy slowed-down pace of “Let the Whiskey Take The Reins” is pure relief from the sexual tension described in the song. The got-a-job-fearing-God anthem “Champaign, Illinois” is actually a mid-tempo stormer take on Dylan’s “Desolation Row.” It may have far less oblique lyrics but still begins with “The bottom line’s been snorted and the bottom card’s been dealt,” reaffirming Dylan’s POV that transcendent states are not merely for dandies and opiated orphans. And that there is hell on earth and it might just be called Champaign, Illinois.

That Dylan track is a good one to bring up, too, as it was the final cycle on 1965’s Highway 61 Revisited, an album which has actually been a more or less direct influence on cow-punk or alt-country than anything you’ll find on a George Jones box set. The Old 97s have the integrity four Texans can only have in singing the oil-rig-workers-on-a-rip rock, trains and trains and trains sung over and over again. But The Grand Theatre is actual pop music way beneath the radar of those who think it’s about success and projection-fantasies. It’s both humble and bracing in the way that most of it should have been before both Coasts started raising moss on the rolling stone, and is a good, ass-kicking antidote for those stuck in such a place.