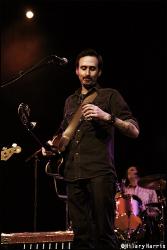 I want into this night expecting nothing less than magic: it was an early spring evening flanked by a gorgeous lunar eclipse, and I was on my way to a notoriously beautiful venue, to see Grand Archives, a band on the brink whose recently release album was spinning nonstop in my ears.

To follow the recurring discussions of this week, it’s true that the Triple Door is simply stunning – easily positioning itself as my favorite venue in Seattle. The staff provided magnificent service, the food and drinks were stellar, and the acoustics pristine. “All very sophisticated” as my guy said. I love how every booth faces the stage and that everyone stays to watch the entire show – from opening act to final note – rather than milling in and out during a set. Triple Door shows feel like actual performances rather than just a way to spend another evening in Seattle. And I’d imagine the opening act artists love playing there because the house is usually near capacity for the duration of their set, rather than sparsely populated as latecomers straggle in just for the headlining act.

This fact may have made opening artists S — aka Jenn Ghetto — a little nervous. The pint-size songstress took to the stage with just her Jag-stang for a short solo set to open the show. She seemed a wee bit nervous, precluding most songs with a disclaimer that she “wasn’t sure if she could pull it off” or hadn’t played a song lately. But her shy, sweet nature and rugged love songs charmed the crowd — especially when she played a “cover” song of her old band, Carissa’s Wierd.

Next up was Sera Cahoone, who, along with her band, played a fantastic set of dynamic, dramatic country-twinged tunes – complete with a pedal steel (swoon!).

As we waited (briefly) between artists, it hit me how this whole night felt like something of a family reunion. All three bands on the lineup have members who’ve woven in and out of each other’s musical lives, originally collected in a gaggle of talent that was Carissa’s Wierd. (Quick history: Since 2003 those musicians have gone their separate ways: Ghetto as S, Cahoone with her band, and Mat Brooke and Ben Bridwell as Band of Horses. When Bridwell and company departed Seattle for South Carolina, Brooke left the band stayed behind, joining forces with Jeff Montano, Curtis Hall, Ron Lewis, and Thomas Wright to form Grand Archives.)

At this show, band members crossed into each other’s sets, with Brooke joining Ghetto for a duet at the end of her set (“We used to play in a band together,” she chuckled quietly); she then re-joined Brooke and company a couple times during GA’s set, as did Cahoone and for one number. It’s nothing short of touching to witness a batch of musicians with such a clear sense of history now share in the glory of each other’s new musical endeavors.

When it was time for Grand Archives to take the stage, they strictly adhered to the CD release-party theme, playing straight through the 11 tracks off their self-titled debut. The four-part vocal harmonies sounded wonderfully full in the space, the band crisp and polished, presenting each song true to the record. Also joining GA were a violinist and a live horn section (sax, trombone, and French horn), lending that special something.

But perhaps Grand Archives were a bit too rehearsed: moments seemed too stiff, and there wasn’t much banter between songs, save for a couple comments here and there, including Brooke joking at how oddly quiet the crowd was. I think that was in reverence to the band, though: It felt like we, collectively, were transfixed by the entrancing beauty of GA’s songs – and it was also a bit like collectively hearing an album for the first time, holding your breath between songs, waiting to hear what the band will do next. Especially awesome was the gentle sway of “Swan Matches” with Ghetto on backups, the still beauty of “George Kaminski,” and the rousing, horn-filled “The Crime Window,” which I attest should be the closing track on the album (end it on the high note!). And fortuntely GA relaxed after they completed the performance of their album: It must have been a big burden lifted to play straight through the tracks. They left the stage and returned for a much looser two-song encore, including a medley that mashed the Zombies with Gordon Lightfoot.

I went into this show expecting magic, and I got it in some unexpected ways: the disparate beauty — yet sense of family — of the three bands on the lineup. The shimmery starlit stage backdrop, alighting the performers from behind. The shared champagne from our tablemates (thank you!). And the jubilant joy of sharing in Grand Archives’ coming out party.