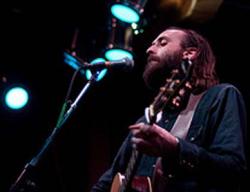 Grand Archives and See Me River at the Crocodile

I’d like to register a complaint against the sound guy at the Crocodile on Friday. No matter where you were standing it felt like your ears were clogged, or your head was wrapped in cellophane. Having never seen Grand Archives live before, I wrote off a lot of their shortcomings to the poor sound quality. However, upon reflection, I have to say it was truly just a boring show.

Packed chock-full of indie musician stars, Mat Brooke’s follow up to Band of Horses with drummer Curtis Hall (The Jeunes), bassist Jeff Montano (The New Mexicans), and guitarist/keyboard player Ron Lewis (Ghost Stories), this band’s reputation precedes it. But for a band touted for their innovative use of unique instruments, this four-piece did little more than strum and bang. Since when did lap slide guitar become something unusual? Maybe they were referring to the harmonica at the beginning of “Birds?” Doubtful.

Most of their old material sounded flat, lacking in variety or catchy hooks. “Sleepdriving” lost all the nuanced lulls that allowed the slightest of climaxes to be powerful. The violin on this song off their self-titled first album was missing, and it made for a completely placid song. My favorite song, the Bee-Gees inspired “Index Moon,” was also watered down and ended early, while other songs dragged on for too long.

“Orange Juice” was one of the few songs that didn’t feel like labor. In fact it was a short period of respite in their almost entirely slow and mundane set. “Torn Blue Foam Couch” was saved for the encore as if it was a reward for the people left in the slowly thinning crowd.

Their new material like “Fireworks,” a song heavily steeped in country and slide, was hard to pick out. “Silver Among The Gold” was the only exception to this, and felt like the only upbeat song played that evening. The bridge was overwhelmed by a danceable drumbeat that felt completely out of character, but at least it was enjoyable.

Don’t get me wrong, I really like this band’s first album and I’m looking forward to Keep In Mind Frankenstein, due out in September. They offer a nice amount of variety while having a strong and consistent identity in relevant country and folk rooted rock. However I think they should reconsider their set list.

I found See Me River more compelling. They played songs off their new EP, a precursor to their upcoming release, Time Machine, out this summer. Their unique sound derives from the interplay between singer Kerry Zettel’s dark and baritone vocal melodies and the instrumental combination of an impressive lineup. Joe Arnone (Charming Snakes and Band Of Horses), Aaron Everett (Das Llamas), Kellie Payne (Charming Snakes and Weirdlords), Tosten Larson (Thorstone, Solo), and Ben Cisner (Tiny Vipers and Windsor For The Derby) are perhaps lesser known on the indie scene than the band members of Grand Archives, but they actually delivered.

Even if they did have three guitarists and a fourth 12-string. Even if the bassist’s antics were offensive and sometimes they really leaned into that cowbell or got nostalgic for the 90’s, even with all this, they were more entertaining than The Grand Archives.