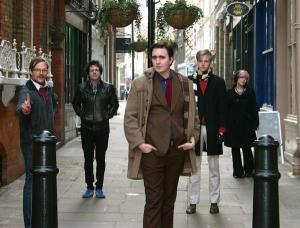 Art Brut could very well be one the few bands that Imaginary Dana, Imaginary Liz and I agree on. Both live and on Memorex, they are one of the most enjoyable bands to listen to. Lead singer Eddie Argos doesn’t so much sing as wax poetically over punk rock instrumentation about varying topics, from working crappy jobs, to wanting to be in a band, to unrequited loves and everything in between.

The band’s latest album, which just came out in April, Art Brut vs. Satan has the band taking on the prince of evil, but, As Argos sings, “don’t worry; [they] can take him”. It’s a fantastic record that continues with the same clever and funny lyrics the band has built their reputation on. My favorite songs on the album deal with being a music fan, with “Demons Out” having Argos declaring in exasperation “The record buying public shouldn’t be voting” because “how can you sleep at night when nobody likes the music we like” and “The Replacements”, where he discovers his new favorite band.

Art Brut is currently on a tour of the US and played a completely entertaining set to a packed crowd last Saturday night as part of the Noise for the Needy festival. Just a few hours before that set, Eddie Argos sat down with me in Art Brut’s green room at Neumo’s to talk about working with Pixies frontman Frank Black, touring and when we can hope to see Art Brut back in Seattle again.

How was recording Art Brut vs. Satan different than Bang, Bang Rock and Roll and It’s a Bit Complicated?

With the first one, we were at our jobs still, so we were in studio at separate times and didn’t see each other the whole time and that I thought that was kind of weird. On the second album, we tried to make a pop album and were tracking it individually as well, but we realized we’re a punk band and wanted to do this album live for the first time and went into a room and bashed it out and pressed record and often went with the first take.

And how did you reach the decision that Frank Black was the right person for this album?

It was bits and pieces, really. Our songs are true stories and I wanted to do them once or twice and record them because you’ll lose that sincerity if you do that again and again and again. After we realized we wanted to do that we asked “who is the expert at doing that?” and came up with Frank Black because that’s how he did all of the (Frank Black and the) Catholics’ albums. And also, he’s cool and we wanted to hang out with him. (laughs) “What excuse could we use to hire Frank Black?” And then he said that he liked us, so we signed him up.

And then you flew to the US to record it with him?

Yeah, in Salem, in Oregon; we flew into Seattle actually before going to Oregon.

Did I read correctly that you recorded the album in just ten days?

Yeah, I thought we had two weeks but the last four days were for mixing. [Black] kind of tricked us because we thought we were making some rough mixes and he was like “no, no, no, that’s the version”.

I really like the final result, which does have a similar feel to some of his Catholics records, which I’m also a big fan of, as well as some of his Black Francis solo albums I’ve really loved.

He’s really prolific, isn’t he? Do you have his Grand Duchy record (the band he started with his wife, Violet Clark)?

No, I haven’t gotten it yet. I need to pick it up soon.

A minute ago you said that Art Brut’s songs are true stories. Some of the lyrics seem almost random but still really clever and funny. How do you come up with these ideas?

I just kind of save lyrics in my phone all day and then when I get home at night I write them in my notebook and then when I go to write songs, I go through my notebook. For something like “Summer Job”, I’ll think about how I had a lot of summer jobs and think “what was interesting about that” and then I’ll write about the interesting bits. And that’s it.

Right. I love some of the lyrics on this album like how used CDs are cheaper but reissue CDs have more songs.

Yeah, that’s on “The Replacements” song.

Right. And is it also true that you really just started listening to The Replacements?

Yeah, that’s right. Look, I’m reading a book about them, I have it here in my bag (shows me a hardcover copy of Jim Walsh’s oral history of The Replacements, All Over But the Shouting).

How’s the tour going so far?

I think Seattle is getting screwed with New York and Chicago getting five straight nights of Art Brut and Los Angeles getting four and we only have one.

I would love to do four or five nights here. Maybe next time we can. I’ve had people in Seattle messaging me all day about this show. We played Bumbershoot (in 2007) before and we really love playing in Seattle.

And the last time you played in Seattle was on the campus of the University of Washington.

Yeah, with The Hold Steady and The Blood Arm.

Yeah, exactly, I remember my apartment being broken into that same morning but I still wouldn’t have missed that show.

We did very nearly miss it overselves but just made it in time.

You also can’t drink on the campus and all three bands, us, The Hold Steady and The Blood Arm are drinking bands (laughs) and all three of us were sober.

Here (at Neumo’s) they are very insistent on making sure there is no alcohol on stage.

I understand with it being all-ages.

It’s okay; I can go an hour without drinking. (laughs)

It’s sort of weird because we’re only playing the one show and have to condense five nights into one night. It should be pretty fun.

What else are you working on now? I thought that I read you had a few songs you had written while making Art Brut vs. Satan…

We recorded some stuff and they’ll probably end up as b-sides. We’re going to sort it out when we get home and practice some of them during soundcheck. We couldn’t here because we arrived late.

And you’ve got a few more dates here in the US before going home?

Yeah, and then we’re playing festivals, but those are mostly on weekends.

And they’re all in Europe?

There’s one in Chicago called the Green Festival. They’re all really fun because every day it’s a different schedule. We’re playing Glastonbury in the UK, which we’re really excited about. We’re playing the second stage this time.

Have you played it before?

Yeah, we played the John Peel Stage three or four years ago and were invited again this year. We thought there was a glass ceiling with that stage but they asked us to play the second stage, which is a much bigger stage and we’re really excited about it.

I’ve always wanted to go to Glastonbury because they always have the strongest lineups for any festival.

If the weather is really nice, it’s great but if it’s muddy, it’s awful. I went in 1997 and they had such a great lineup. It was Bob Dylan, Nick Cave, Sonic Youth and Pulp all in a row. That’s a pretty good lineup, isn’t it?

I was right up front and on the telly and you could see my face in the front row staring up at the stage.

Was that part of what made you want to become a musician?

Oh I always wanted to be in a band; I can’t remember not. (laughs)

I was wondering if there would be a third Art Brut record because you had a few other bands that you formed.

I’ve got two other bands, one is with my girlfriend and we have an album coming out, it’s Everybody Was in the French Resistance…Now and that record is coming out in January. We actually recorded that album before the Art Brut record but the Art Brut record came out first. Art Brut really is my life. I’ve also got a band called Glam Chops, which is a glam band.

Are there plans for Art Brut to come back to Seattle soon?

Yeah, we’re hoping to, maybe in August or September. Our booker lives in Chicago and we saw him yesterday. We’re definitely going to be back in the fall at some point.

I hope that you can fit in another stop in Seattle then.

Yeah, me too. I love it in Seattle.