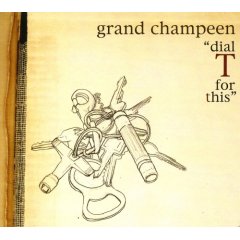 Dial T for This

Dial T for This, the latest release from the Austin, TX-based quartet Grand Champeen, is proof that great new music can still be made using old, dusty equipment. The entire album was recorded straight to tape, giving it a rough-and-tumble sound – one that sounds soulfully authentic compared to the overly polished tone of most modern-day digital recording equipment.

This homage to the roots of pre-computer rock music permeates the overall sound of Grand Champeen. The album is straightforward pop rock with a slight twist of Southern comfort. The songs are sort, concise, and catchy. The band very obviously strays from their contemporaries, seeing how the record is absent of any sort of 10 minute, fuzz-riddled epic experimentations. It's apparent that these guys just plug in and rock out.

While some would say that it doesn’t take much to camp out in a garage, drink cheap beer, and slam out Grand Champeen style of music, I would counter by saying that this album's beauty lies in its simplicity. The sheer charisma of the band radiates in every power chord, and this is accentuated by the melodic prowess of front man Channing Lewis. On songs such as "Wounded Eye" and "Can I See You Again?," every instrument is jockeying for supremacy, each challenging the other to be heard. These songs sound complete – anything more would spoil this hot pot of rock stew.

However, I can’t say that this whole album is just one long soundtrack to a backyard barbeque. "Rottweiler Hair" and "Olivia" are two tracks in which the band slows down the tempo and let the songs breathe a bit. At this speed, Grand Champeen channel the Pixies-style of broken stability mixed liberally with a few remnants of Dinosaur, Jr. Dial T for This is a refreshing take on old school rock n' roll, successfully incorporating a batch of new influences with the tried-and-true traditions of the genre.