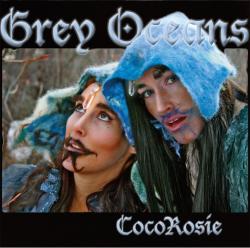 Grey Oceans sounds like a night in the desert, which makes sense, as CocoRosie’s fourth full length is released after Sierra and Bianca Casady moved from France (where they started the band) to New Mexico. Back in their home country but currently touring the UK, Grey Oceans sounds as travel-amok as the journeys the sisters created the music on, from Germany to Australia, Buenos Aires to New York, and of course their beloved Paris.

There has been some early negativity about this release, as CocoRosie hops from Touch and Go to Sub Pop, and unveiled some arguably gauche cover art. (Like this isn’t their usual form of taste-terrorism [see the shit-storm about unicorns and vomit on the cover of 2005’s Noah’s Ark]; apparently Internet indie-gurus are amnesiac or bored and itchy for a brouhaha.) Their musical use of children’s toys and voices, pin-struck harps, precious piano, sampled subtle cacophony, and vocal phrasing which darts from art pop to hip hop all in a hashish haze, are best and most flagrantly exemplified by tracks two and three here, “Smokey Taboo” and “Hopscotch.” This combination, which they may not own but certainly were contemporaneous with their ascent, strikes some as dilettante. Where Joanna Newsom can get away with a three album set due to her being seen as a “serious artists” (due to allegiances? Pleasing racial homogeny? I’m not sure but can guess), CocoRosie have more baggage, being one of those “eternally new” bands (they’ve been at it since 2003) and taking on the wrath towards Williamsburg (where Bianca lived and partied very ironically). With Sierra studying opera singing early on, their initial work mock-celebrating Native American spirituality, and embracing the French language and style of sources as sound tchotchkes, they may be seen by skulking rock boys as frivolous hodgepodge. These are probably the same lads who once scrunched their freckled noses and griped, “Why must Nouvelle Vague play cover versions?” and “Vampire Weekend appropriate seriously!” Their only research-gym work outs being cleverly topical cardio, which is why their fight carries no weight.

CocoRosie start Grey Oceans with a weepy, gauzy ballad, “Trinity’s Crying,” and the album’s tone is a little too set from there. This is a quieter, less freaky work than the catawampus of Noah’s Ark (no Antony from the Johnsons or Devendra this time). But the Gnostic playground where weird mystical observations spray from unexpected pop culture potholes keeps one listening throughout, as the creepy stuff and melodic stretches invite a frequent revisitation.