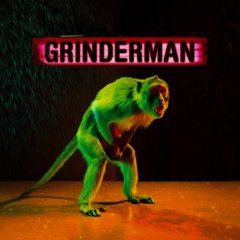 There was a time when rock music was all about adolescent angst and misdirected sexual energy. Sadly, for myriad reasons too numerous to list here, most of the music that sees any level of distribution, or reasonable opportunity for mass consumption, is more like a calculated exercise in targeted marketing. Young musicians are just as screwed as they ever were, they're just a bit more savvy about the business end of it now and more likely to get something out of it in the end. Twenty is the new fifty; the rage, confusion, and energy replaced by reasonable business acumen and a good eye for public relations. Fortunately for us, and thanks to the new Grinderman album, it looks like fifty might be the new twenty.

Nick Cave's been at this game for a long time, and as he pushes (very) close to 50, he seems to have rediscovered his youthful vigor, angst and humour in this new project featuring three of his fellow Bad Seeds (Warren Ellis, Martyn Casey, and Jim Sclavunos). Nick Cave is the headliner here by reputation only; by all accounts this a very collaborative project that grew organically out of the Bad Seeds, starting with the Abattoir Blues/The Lyre Of Orpheus sessions, wherein a new approach was taken to songwriting that relied on much more improvisation, Cave playing off of his bandmates rather than to them. While Abbatoir stayed fairly close in style to more recent Bad Seeds works, Grinderman, and their self-titled debut album, looks further back in Cave's career for it's antecedents, hewing much closer to the feel, if not always the sound, of his seminal antipodean noise-punk band the Birthday Party.

Where Cave has become a true songwriting craftsman and grade-A crooner over the course of his later career, Grinderman revels in it's primitive absurdity; primitive, likely in no small part due to Nick Cave's sudden switch from pianist to guitarist. It gives the guitar work an instantly fresher and more immediate feel, as well as a primativist viscerality that hits the listener hard. A humourous absurdism seems to have made a return to the cannon as well, essentially MIA since the days of the Birthday Party. The Bad Seeds records were always a bit strange and surreal, but we haven't seen so much of the humour that is on display here in a long time. It's a side of Cave that is often forgotten in the murder ballads and dark dirges which have dominated his career of late, but makes a welcome return here.

In order to provide some context, let me say I have been a great admirer of Nick Cave's works from the very beginning (the song "Shivers" from the pre-Birthday Party band Boys Next Door contains one of my two favorite lyrics of all time: "and my baby's so vain/she is almost a mirror/and the sound of her name/sends a permanent shiver/down my spi-i-i-i-i-i-i-i-i-ine") all the way through the Bad Seeds catalog ("The Mercy Seat" is hands down my favorite song in the history of music); however, in the past 10 or so years, while I had continued to purchase the albums and give them a cursory spin, I felt that his/their albums had become a little same-y. I put on the Grinderman album not having read any reviews or heard any buzz, knowing only the personnel involved, hoping for the best, expecting… well expecting more of the same.

Well smack my ass and call me stupid. This is defintely NOT the Bad Seeds part II.

Album opener "Get It On" caused me a moment's hesitation, as it opens on what feels like free form poetry, and gave me an unsettling feeling that Cave was going to spread his artistic wings a little further (like the books and movie scripts weren't enough) leaving the rock (and accessability in general) behind; but then halfway through the boys begin to reach the rock in a sing-a-long-y fashion that sounded a little like a Ginsbergian take on Black Flag's TV Party (without the "TV"). [His left eyebrow raises as intrigue fills his mind.]

Track two is where it really gets good, though. "No Pussy Blues" is essentially a dark and hilarious take on an aging rock star attempting, and failing, to bed a beautiful young fan. Musically, I don't even know what to say about "No Pussy Blues," other than Thank You. This is the best thing Nick Cave has done since Tender Prey. It's what I imagine the Birthday Party might sound like today if they had stayed together and kept with the times. It gives me faith in mankind and warms the cochels of my cold heart. I think it could solve all the world's problems. Plus, it makes me a little horny (and ultimately, more satisfied than the song's narrator…).

Title track "Grinderman" comes off like a half-sized version of the Doors' "The End" minus the overblown hubris and infantile psychologizing, with snaking guitar lines, which readily recall Robbie Krieger, underpinning a dark and driving electric blues drone. "Depth Charge Ethel" heads back to Birthday Party territory. Even its title recalls the strange imagery of those old Birthday Party tunes ("Big Jesus Trashcan," "Pleasure Heads Must Burn," "Zoo Music Girl," etc.). "When My Love Comes Down" is all smoldering intensity anchored by what sounds a bit like bare bones MBV production work in the most overt (but not only) nod to newer studio technology on the album. The album closes with "Love Bomb," which is like a stripped down Stooges song, especially reminicent of "TV Eye," but with half of the racket (which, for me, is usually a big minus, given my lifelong love affair with the Goddess Feedback), but it retains every ounce of intensity that the classic Stooges' records had. (Please note, I said had. Oh, Iggy, why? Your new record made at least two of my friends cry, and not in the good way. Why? Whywhywhywhywhywhy?!?!? )

Grinderman is a great example of how an artist can grow and mature, but still retain that spark of youth. It's funny, smart, strange, loud, dark, and just damn fine rock music. In other words, it's the balls. Nick Cave and the boys have my full attention back; I cannot wait to see this played live and hear whatever comes next.

Due for release in the states on April 10, 2007, it's already out across the pond. Go ahead. Touch their monkey.