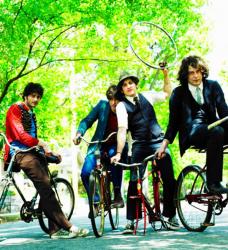 After changing their name (from Au-Fir-Ju Well), Gringo Star decided to rework old songs and put them out on a six track, self-produced ep. Well-known about the Atlanta, Georgia scene, Gringo Star has recently focused its attention on the rest of the nation with a steady diet of touring.

I have to admit to being a little distracted by the pictures on their cd insert. These dudes are hot, in a kind of soft private school boy way. With moppy, unwashed hair and button up shirts they look like pin up boys from the late 60s. If I was twelve, I most likely would have blown up their pictures to post to my wall, an aid to fantasies of a world where boys are this pretty.

Influenced by the Kinks and the Animals, Gringo Star shows real rock promise with tight music and vocal variety. The jazzy piano on “No Man” is burlesque, fighting with vocals that follow the bass. Esmerelda is a delicious DeVotcka like ditty with a little surf style drums and guitars. The accordion has the most character here, and nicely compliments the lyrics about a beautifully devout woman. Wistfully, I can imagine that an entire album of Esmereldas would have gotten prize pole position on my ipod.

I look forward to a full length from Gringo Star, which provided they have someone else pick the ordering of songs, will be interesting and delightful. I would also love to see these guys on tour with someone like San Francisco’s Diego’s Umbrella. Not only would it be a night full of eye candy, but I think it would also be a lot of finger clacking and skirt twirling.