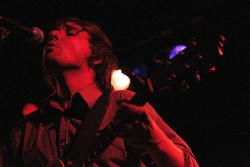 Grizzly Bear: Not quite ferocious, but the bite stays with you

There's no telling how a night will turn out. First your friends are streaking through a park soccer game, and all is hilarious and well. But the door security at the night's show takes one look at them, decides they're too drunk to be let in, and the night starts to look bleak. Ah, don't feel too terrible about telling them "tough luck" and heading in alone, because there just might be another lone attendee who notices you and offers to share his pint [read: GIANT] Red Stripe.

The Red Stripe stranger divulges he's from Burlington, VA, which is explained as equidistant between the music capitals of Montreal, New York, and Chicago. Thus, "I'm spoiled when it comes to live music," he says. He's telling me this in response to what he thinks about second opener Deerhunter; I guess they just weren't good enough for his music snob tastes.

I had to somewhat agree at first; even as a fan of "wall of sound" type music, Deerhunter had so many "walls" they were on the verge of building a mansion. However, I think my out-of-state pal was a little too quick to judge — beneath those pedaled guitars and barrage of bass, the band was weaving in minute details to keep things interesting. When they did give it a rest for a second, their subtler moments were just as intricate and well-executed.

I was also impressed the openers actually sounded like they sprung from the same vein as the headliner. Besides, if you're in, let's just say the right mindset, their music is phenomenal. I suppose Red Stripe guy was not convinced, because he didn't stick around after Deer Hunter. Too bad for him, because he would have had his mind blown away by the night's headliner, Grizzly Bear.

I don't even know where to begin for describing how amazing their performance was, honestly, but you aren't here reading this for a string of adjectives, so I'll attempt to put their show in words. What sounds like subdued, sleepy romance in recordings, their music translates to dynamic movements and layers upon layers of sounds that fit perfectly like puzzle pieces. With the amount of instrumentation going on in their songs, it would be extremely easy for someone who doesn't know what they're doing to create a mushy, incoherent sludge of songs. But Grizzly Bear is comprised of four professionals, who create extraordinary, detailed masterpieces.

Not to pinpoint only one member from four very talented musicians, but I have to discuss Chris Taylor. Possibly ADD, caffeine, cocaine, I don't know, something fuels this man as he frantically navigates the endless arrangement of peddles, tosses between a clarinet and a flute, sets up a loop pedal, then suddenly picks up the guitar. He even has time to join in on the chorus of vocals! A truly gifted artist, not only to listen to, but also to watch as he works his craft.

On a word about the chorus of vocals, I want to know how four unrelated people located each other to start a band full of beautifully harmonized vocal pop harmonies. Grizzly Bear is tighter than a barber shop quartet, their voices seemed to have been created specifically for singing together. Even live, they didn't miss a beat, everyone was perfectly on key, they were possibly fresher than a recording. Perhaps the most inappropriately named, "Lullabye" was the most rousing song of the set. The build-up created with the repetitious, "Chin up, Cheer up.." was enormous, you couldn't help but be carried away. They performed "Colorado" evoking an applause from the audience, due to it being considered too long to play at the string of festivals they played this summer. The last time they came around here was for a festival, Sasquatch. Their set was too light for the outdoor stage, the songs became carried away in the heavy winds. But enclosed within the walls of Neumo's [or were those still from Deer Hunter?], their music is full bodied and breath taking.

I wish we here at TIG gave numbered ratings to live show reviews just for this one, because I would definitely give Grizzly Bear's performance at least a 9.