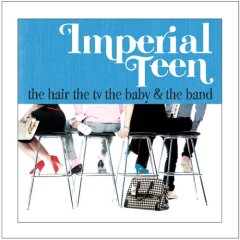 The Hair the TV the Baby & the Band

The title of Imperial Teen’s latest album is an explanation for this being the band's first album in five years. Bassist Jone Stebbin owns a hairstyling business, drummer Lynn Truell had a child, guitarist Will Schwartz worked on his other band hey willpower. Keyboardist/guitarist Roddy Bottum was a music supervisor and composer for several films and television shows.

After five years, it was worth the wait.

This is a bouncy and just plain fun pop record that I cannot get away from my iPod no matter how much I want to (I don’t). It’s quite refreshing to listen to a band of adults who still love making happy, pogo-y bubblegum pop, just with smarter and more clever lyrics than you are bound to hear on the radio at any given moment.

The theme of this record is whether or not a band can age gracefully and continue their adulthood in tour vans and rock clubs. Imperial Teen seems to be telling us it is time to move on to their grown-up lives and day jobs and families even though they’ve had a lot of fun and don’t want to give it up — but must. Songs like “Room With a View” leaves the impression that this could be the final Imperial Teen record with lyrics like:

And the neighbors are asking,
Can you please keep it down?

That’s not the only reference. On “It’s Now”, Schwartz asks, “Why do I get the feeling it’s time to go? You got mirrors on the ceiling; You’re serving Darjeeling with your art noveau.” Just name a song and you can find lyrics that continue with that theme.

With that concept, there are many different directions Imperial Teen could have taken, yet they chose to make a fun, (mostly) upbeat pop record. By most measurements, The Hair the TV the Baby & the Band (no commas) is a huge success. “One Two,” “Shim Sham,” and “Sweet Potato” are some of the catchiest pop songs I’ve heard in quite a long time (and about 85% of what I listen to could be labeled as “catchy pop songs”). This is a challenging record that takes several risks (for example, every member of the band sings lead on at least one song) but never missteps. “Everything”, the first track, sounds like an epic Broadway musical number. “Fallen Idol” has the feel of a vaudevillian number. “Shim Sham” and “Sweet Potato” bring the B-52s to mind. For all the different tacks they take, I still want to sing along to almost every number.

As an unrepentant lover of bubblegum pop music, I often feel the need to sacrifice clever songwriting and lyrics for upbeat tempos, sing-a-long choruses and masterful production. Imperial Teen understands this better than nearly anyone but don’t accept it as a zero-sum game.

The Hair the TV the Baby & the Band is an adult pop record, made both by and for adults. This is a triumphant record for a band that is at the top of their game – even if they feel too old to keep it up. Of course I selfishly want bands I like to continue make records and the ones I dislike to stop. This band has made four damn fine records and been together for over a decade; if it is the final Imperial Teen album, really, I understand.