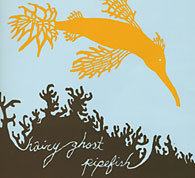 Among the plethora of songwriting nuances that Corespondents seems to grasp on its latest release, Hairy Ghost Pipefish, is the value of change. Tempo variations, crescendos and decrescendos, it is all fair game – and it all works towards telling a greater story. A wordless story at that. The missing piece to the Jose Gonzalez / James Blackshaw tour, the pairing of Seattle’s Olie Eshleman and Doug Arney has yielded an entirely acoustic sound that somehow confounds the listener’s best efforts to keep pace.

“Confessor,” the album’s second track, offers some context: nearly half of the tune’s precious three minutes is spent in a style John Cage would admire, namely silence. Few if any noises disrupt the progression – until a twangy, mischievous, Peter and the Wolf-style stomp breaks in unannounced. So abrupt is the transition, and so vividly descriptive is the subsequent string massaging, that the listener feels as though he or she has interrupted a campfire story at its climax. It is these kinds of choices, however, that define the artistry of Corespondents. And it is these kinds of choices that force the listeners to invent the storylines themselves. The results, inherently, are pleasantly bizarre.

The other subtlety that Corespondents is able to flesh out is background noise. The majority of the time, it is nothing in particular. Some buzzing, maybe some missed notes. But it provides a sense of reality that grounds the album and makes it easier to absorb. The third track, for example, “Last Day of September,” features that eerily deep, barbituric voice a la Clockwork Orange and Portishead that just scares the crap out of any full-grown adult. Nevertheless, it succeeds in buoying the somewhat quirky tune and carrying it along to its gorgeous, soft conclusion.

The bulk of Corespondents’ work, however, is simply beautiful acoustic guitar hooks. These melodic phrases repeat themselves throughout the album, colored varyingly by lone lap steel slides that turn the room blue and cold or found-sound screams that maintain the mystery of this eleven-song tale. (How do they come up with these noises and make them interesting enough to hold our attention for four minutes at a time?).

The meat of the album is its literal center – tracks six, seven, and eight. “Bear Bare” sounds like a studio session manned by Brian Eno in which the duo was told to reiterate the same line until they came up something new. The result is dueling guitars playing in differing sequences, much the way Eno might have approached it himself. “Secret Ancient Man” is a bit more introspective, and is subsequently the most pleasant tune with its light gait and happy-go-lucky tone. “Pinch Coach” rounds out the trifecta with an almost imperceptible switch from gypsy jazz into Americana pining.

Bill Frisellian minor chords, a Decemberists-esque opus and even some actual piano notes flesh out the remaining compositions. Ultimately, however, it is the genuine simplicity and exquisiteness of the duo’s acoustic guitar abilities and songwriting brazenness that wins out. Rarely has so much been done with so little.