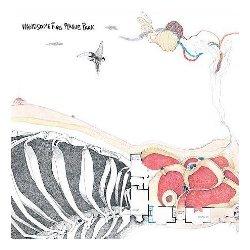 What causes a band to breakup, and for members to take on different projects? Ego, possibly. But more likely than not, creative differences cause collaborators to give up what they’re known for and pursue something different.

In 1970 the Beatles announced their breakup: John Lennon went on to do more experimental music while Paul McCartney ended up taking a more mainstream approach. Wolf Parade, another band with two vocalists/songwriters fronting the group, seem to be repeating this history. Now I'm not comparing the two band cause, c’mon, who would be that stupid? I'm just providing background for how yin and yang styles and personalities can come together to create something greater than they can alone. Wolf Parade vocalists and songwriters Spencer Krug and Dan Boeckner have created two albums that showcase their individual personalities, but also show they need each other to create something amazing (Sunset Rubdown and Handsome Furs, respectively). Like Lennon and McCartney, Krug and Boeckner took their side projects in opposite directions.

This can be best explained via The Wolf Parade song, “I’ll Believe in Anything.” The song begins with the screechy synthesizer provided by Krug, which lays the foundation for the tune. But it's soon sent to the background by Boeckner’s melodic guitars, the cheddar to Krug’s refried beans of the seven-layer dip.” I’ll Believe in Anything” is my favorite Wolf Parade song, melding both of the frontmen’s styles together perfectly (and don’t forget about the brilliant video). It’s these styles coming together that make Wolf Parade what they are best known for — layered instrumentation and vocals that somehow weirdly fit together like a jigsaw puzzle to create a bigger sound than what they could do on their own.

Separate those sounds, taking all of the arty synth magic, and the gentle, melodic guitar, and pull them apart, and you get Krug’s and Boeckner’s side projects.

Handsome Furs consists of Dan Boeckner (of Wolf Parade) and Alexei Perry. Using minimal instruments to create a more scaled-back sound than Wolf Parade, Handsome Furs use mostly guitar and vocals to express their points on Plague Park. The music relies mostly on Boeckner’s rich, baritone voice, which carry the songs stronger than the guitars or simple drum-machine beats. The songs’ melodies immediately grab you by the collar and pull you into Handsome Furs’ face, making sure you pay attention to Boeckner’s words.

Handsome Furs hate metropolitan areas, and they tell us so. On “Handsome Furs Hate This City,” Boeckner croons about his sorrows, blaming them on the city in which he dwells. “Life is long and hollow,” he tells us after he admits about the city he lives: “There is home.”

With a certain distrust, Handsome Furs also hate the outlying areas. On “Dead + Rural,” a dancy account of the repetitiveness of small towns, Handsome Furs travel to a “dead-end rural town,” although they, “have some friends there.” This theme of loathing all places where people cohabitate continues on “Sing! Captain” where Boeckner admits, “We hate this place here/It’s our home.”

All the hate aside, what we have here is a polished and pretty album exuding more dialogue about your home base than Citysearch. The album sprinkles lovely guitars over simple drumbeats, all the while forcing you to listen to Boekner’s voice. As a side project, Boeckner proves he can do it on his own, showing he could even be a brilliant solo artist if he chooses.

It’s hard to tell how this album will resonate with the public, although Wolf Parade fans are probably hoping it doesn’t hit big so Boeckner will stay with Wolf Parade and not try to leave permanently. But Boeckner’s return to Wolf Parade will be well welcomed. What we have in the meantime is a great piece of amuse bouche to Wolf Parade’s next main course (tentatively slated for an early 2008 release).