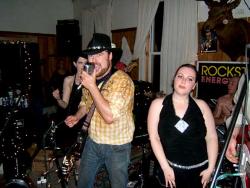 Offstage he's one of the most genuinely nice and modest guys in Boston music; onstage, he'll fool you into thinking he and his banjo just got off the bus from Tennessee while he rocks your bones and steals your ladies. I'm talking about Kier Byrnes, leader of Three Day Threshold and thrower of the weekend's hottest party north of the Mason-Dixon. Byrnes and his Three Day Threshold bandmates put together a four hour "honky tonk jamboree" that included free barbecue from beloved local restaurant Redbones, free booze from a few sponsors including Nantucket's Whales Tale Ale, delightful dance numbers by burlesque dancers, and — the biggest hit of the night, other than the bands themselves — a mechanical bull. No shit.

Upon arriving at the Elks Lodge, long lines formed for all the freebies while The Hansen Sisters played an acoustic, country/folk-tinged set that included originals and covers. At times the pair was joined by members of other bands, filling out their sound. They were hindered by an early start time (7pm) and the crowd's larger interest in getting its grub on, but they still played a fun spirited set for the small crowd that listened. As Sam Reid and the Riot Act played their bluegrass-y set, people began to face up to the bull. The large inflated ring around the ro-bovine took up much of the room, which grew warmer by the minute while the crowd filled in. Because of the intolerable heat and long lines for beer, my companion and I snuck out and grabbed a couple of beers next door, opting to miss some of the bands on the bill out of a desperate need to cool off. We saw many other cowboys and cowgirls doing the same thing.

Sadly, we missed Girls Guns and Glory, recently voted "Best Local Live Band" by the Boston Phoenix, and most of Tin Can Tele. We made it back in time to watch three Boston Babydolls perform routines that involved stripping down to pasties and undies; one danced with a parasol in a 1940s pinup ensemble, another began in coveralls, carrying a toolbox, with a cardboard taxicab that she danced in and around, and the third, who seemed to earn the roaringest crowd reaction, peeled off her nun habit to reveal devil horns and flame-themed undies. When Three Day Threshold finally hit the stage, the crowd was rip-roaring drunk, soaked with sweat (as were the bandmembers), and ready for a good old fashioned hootenanny. Byrnes, in his signature black cowboy hat, charmed at every turn, plucking his banjo fiercely and gripping the microphone with hot country brawn, while standing wide-legged like any good country rocker. Colt Thompson shook his booty while he fired off guitar licks and background vocals. Johnny Stump on bass and D.A. King on drums kept the rhythm thundering along at a rowdy pace. The crowd was focused simultaneously on the band and the bull — at this point, attendees had gotten the hang of it, and paired with obvious intoxication, the riders, at times impressive, were always hysterical. Beach balls were bouncing above the crowd line, and eventually a game of hit-the-lightbulbs-hanging-from-the-ceiling-and-make-them-go-out began, with the crowd ultimately winning and creating a darkened room where only the stage lights remained.

The whole thing was remarkably fun and successful; if only it hadn't been so dang hot in there. This show served as the release party for Three Day Threshold's Against the Grain, on local label Hi 'N' Dry, and album sales seemed to be booming. I have the album and it's good, but Three Day Threshold can't truly be experienced on record — they're about the good time, the party, the fire they set and the reaction they receive when playing live in front of a rowdy crowd. They're the band to book at public outdoor summer festivals and the like, as a guaranteed crowd pleaser that's fun for the whole family. And it sure don't hurt that they look mighty good shaking their stuff in jeans and cowboy boots.