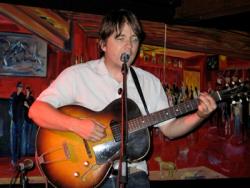 Anyone who was distanced by the lack of Okkervil River banter at Monday night's show should be been at the Sunset last night. The Australian in residence, Darren Hanlon, marked the final show on his three-month world tour (he's got an unofficial show in Bellingham tonight, but even he labeled last night's show as the closing of the tour) by recounting some of the most memorable snapshots of the tour in between songs.

He started of the show recounting his first show in the US ever, at Seattle's Eye and Ear Control as an intro to "Record Store." From there he smattered the set with a variety of songs from his four-album catalog and throughout the set he took requests (as randomly shouted out by the audience) that resulted in charming renditions of "The Kickstand Song" and "Brooklyn Bridge."

The two highpoints included his "Manilla NSW," in which he took off the guitar and with only keyboard accompaniment (supplied by nice-guy Portlander Corey) theatrically crooned the lyrics to the delight of the entire audience, and his recounting of his visit to Shorty's — a place he called heaven on earth (he's a hopeless pinball fanatic).

Here are some civilian pictures of the whole event…