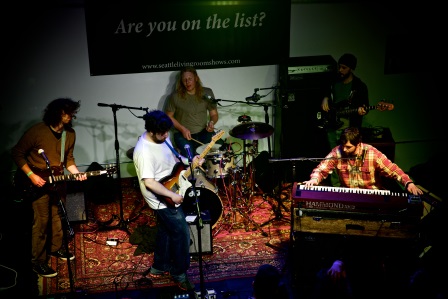 How do you throw yourself a surprise party? If you’re Kristen and Carrie Watt, you book a festival’s worth of the Pacific Northwest’s favorite indie musicians and a glamorous private venue in SoDo and then sell tickets announcing only the date and time. And if you’re the Watt sisters, fans and friends of Seattle Living Room Shows will trust you and flock to see your mystery acts. And they will love it.

Iska Dhaaf opened the celebration. The drums and guitar/keyboard duo sounds heavier live than recorded. Reverb-drenched vocals and Doorsy keyboards give them a bit of a ‘60s sound, but the songs have more of an angular Alt-J feel than a retro one. Every aspect of their performance had clear intentionality that you rarely see in a live show. Even the guitar feedback was controlled. In fact they talked to the sound guy more than the audience, but all this attention to detail did nothing to diminish the intensity of the performance. People on either side of me were asking, “Who is this again?” as they danced. Yes, that’s right folks. Seattleites danced to unfamiliar music.

After the careful constructions of Iska Dhaaf, Rose Windows’ fuzzed out psychedelia suffered from a sense of relative muddiness, but managed to mesmerize the audience anyway. Sounding equal parts Jefferson Airplane and Black Sabbath, it’s easy to imagine band meetings involving ritual consumption of psilocybin (if the reality is tour van repair cost spreadsheets, don’t disabuse me of the fantasy). Rose Windows feels like a jam band, even though their stage show stays pretty close to the recorded album. The set was enriched by new songs that traded some otherworldliness for groove.

The last band to play a full set was The Moondoggies. I wasn’t very familiar with their music, but I’d heard enough about them to expect more of an experience than a performance. The experience was beer and sunshine, backyard barbecues before you had any reason to think that you wouldn’t always be young and these friends wouldn’t always be there for you. You know, a peaceful, easy feeling without the mellow.

These three bands were enough to make it a great night, but after the regular show, the Watts had planned a celebratory round. Not a “Row, Row, Row Your Boat” kind of round, but a full set of music in which a different artist performs each song. About a dozen performers who have been part of the Seattle Living Room Shows six-year history took part. The round performances tended towards the folksy and acoustic, so it was fortunate that most of the chatty guests had left and the remaining audience was true to the SLRS intention of respecting the artists with their full attention.

Kris Orlowski and Anderson Torry led off with a penguin joke and two songs, followed by a stream of performers that included members of St. Paul de Vence, Star Anna, The Horde and the Harem, Blake Noble playing 12-string guitar and didgeridoo simultaneously, the Local Strangers, and more that I either can’t remember or never knew. The Watt sisters have unearthed a lot of talent in their six years of hosting shows, and a good chunk of it was on view at the six year anniversary show.

If you missed it, it’s not too late to get on the list for upcoming Living Room shows and Secret Shows. All you have to do is visit http://www.seattlelivingroomshows.com/ and enter your email address. There are two Living Room shows in May:

Just remember, whichever show you go to, SLRS are about the music. So if you go, STFU and listen. You’ll be glad you did.

{All photos by Mocha Charlie}