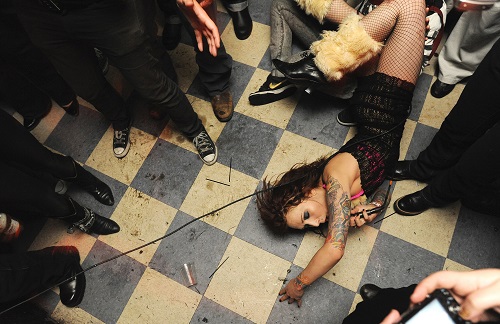 Hello, Imaginaries! I can’t believe that the 40th Seattle International Film Festival starts THIS THURSDAY! (what. the. what.) Anyway, if you haven’t had a chance to check out the Face the Music line-up this year, let me moonwalk you through it, because there’s a lot of really rad stuff I don’t want you to miss!

First up, let’s take a look Keep On Keepin’ On, a tribute to jazz legend Clark Terry, who taught Quincy Jones and Miles Davis, and who helped blind pianist Justin Kauflin realize his dream. There are two special events happening around this spectacular documentary: An Evening with Quincy Jones, in which the Festival’s Lifetime Achievement Award will be presented to Jones at the premiere screening of the film, and The Justin Kauflin Trio is playing at The Triple Door as a companion performance with a special introduction by Quincy Jones. Sounds like a 3-day jazz-lovers extended dream date! {An Evening with Quincy Jones Special Presentation Screening & Tribute 6/4, 7:30pm at SIFF Cinema Uptown; Keep On Keepin’ On screens again 6/6, 4pm at SIFF Cinema Uptown; Companion show with The Justin Kauflin Trio, June 5 at The Triple Door, 7pm}

And of course, Opening Night is the premeire of Jimi: All is By My Side, a story about Jimi Hendrix before he was Jimi Hendrix. Sure. Okay. Why not? Outkast’s André Benjamin stars as Jimi, a rising musician caught in a sticky love triangle between Linda Keith and Kathy Etchingham. SCANDALOUS. {Screens on SIFF Opening Night, 5/15, 7pm at Marion Oliver McCaw Hall}

Nick Cave fans, check it: get a peek into the enigmatic musician & writer’s everyday life—sort of—with a fiction-mentary by Directors Iain Forsyth & Jane Pollard. 20,000 Days on Earth is described as “blending fact, fiction, and fantasy” and the trailer looks AMAZING. Can’t wait to see this one. {Screens 5/16, 10pm at Lincoln Square Cinemas, and again 5/21, 9:30pm at SIFF Cinema Uptown}

Imaginary Shoegazers will definitely want to buy some tix to Beautiful Noise, which traces the genre’s origin from its Cocteau Twins & Jesus and Mary Chain days right up through everyone’s favorite eardrum-blowers My Bloody Valentine. With testimonials from musical luminaries that include Trent Reznor and Robert Smith (!!! !! !) it sounds GOOD, so good, it’s so good. So good. Just. Like. Honey. {Screens 5/31, 9:15pm at SIFF Cinema Uptown, and again 6/1, 9:15pm at AMC Pacific Place}

It’s no secret all us imaginary girls are big fans of Tennis Pro, and so we’re super excited that their docu-maybe-mentary film Big in Japan is screening at SIFF! Tennis Pro songs! Tennis Pro faces! Tennis Pro, Tennis Pro, TENNIS PRO! My prayers for something that combines my childhood obsession with The Monkees & my current obsession with this poptastic Seattle band have clearly been answered. PRAISE SIFF. {Screens 6/5, 7pm at The Egyptian, and again 6/7, 12:30pm at SIFF Cinema Uptown}

I’m also pretty excited about Frank, the “real-life inspired” story of a difficult musician who refuses to take off his giant, papier-mâché head, because 1) I can absolutely imagine this being a real thing some musician would do (No, I am not naming names) would do, 2) Michael Fassbender, 3) Maggie Gyllenhaal, and 4) A GIANT PAPIER-MACHE HEAD IS THE BEST THING EVER. {Screens 5/30, 9:30pm at the Egyptian Theatre, and again on 5/31, 2pm at SIFF Cinema Uptown}

Two things about Begin Again that make me want to see it (and one of them IS NOT Adam Levine): 1) It’s Directed by the guy who brought us Once, and 2) Mark Rufallo. Apparently it’s about a recently dumped female musician in New York who meets an equally down on his luck record producer. John Carney sure likes to bring us semi-depressing musical romances, doesn’t he? Another soundtrack I can’t wait to hear. {Screens 5/24, 6:30pm and again 5/25, 4pm at The Egyptian}

ALSO: Belle & Sebastian’s Stuart Murdoch (!!!) has his debut film at SIFF this year, God Help the Girl, which is a musical based on songs from his 2009 album! The description had me at “twee sentimentality.” What more could an imaginary girl ask for? {Screens 6/1, 1:30pm at the Egyptian, and again on 6/3, 7pm at SIFF Cinema Uptown}

Another directorial debut about an industry legend is also playing. Mike Myers stepped behind the camera to bring us Supermensch: The Legend of Shep Gordon, a documentary packed with interviews and personal stories about the manager who handled Blondie and Alice Cooper’s careers, and then switched from the music world to the culinary world by creating the idea of a “celebrity chef.” Schwing! {Screens 5/17, 9pm at AMC Pacific Place, and again 5/18, 1pm at The Harvard Exit}

And let’s talk about the beloved, perpetually sticky-floored punk club that disappeared not long ago from under the Space Needle: The Funhouse! Razing the Bar is a documentary from local filmmaker Ryan Worsley, and I can’t wait to watch it—and hear a kick-ass soundtrack. Hint: bring some earplugs! {Screens 5/20, 9pm and again 5/27, 9pm at SIFF Cinema Uptown}

Get your tissues ready for one of those “crying so hard you can’t see the screen anymore” documentaries: Alive Inside: A Story of Music and Memory, which shows the powerful effect that music can have on Alzheimer’s and dementia patients. But like, happy crying. I think? I don’t know. It looks craze-mazing, even though it will also probably be emotionally crippling. {Screens 5/17, 11am at SIFF Cinema Uptown, and again 5/19, 7pm at AMC Pacific Place}

You might also want to keep those tissues handy for Living is Easy with Eyes Closed, a Spanish film set in 1966 about an English teacher who uses Beatles’ songs to teach, and takes a road trip to see John Lennon, who is filming in Almeria. Strawberry fields forever? {Screens 5/17, 6:30pm at Lincon Square Cinemas, 5/22, 6:30pm at The Egyptian, and again 5/23, 4pm at SIFF Cinema Uptown}

Special mention: The return of a midnight showing of The Rocky Horror Picture Show! Goodie bags (I hope they included uncooked rice, because that one time I saw at The Neptune with steamed rice was a DISASTER), subtitled lyrics, and more. Let’s do the time warp again, shall we? {Screens 5/16, 11:55pm, at The Egyptian}

Which screenings are you most excited about, imaginary film fans?