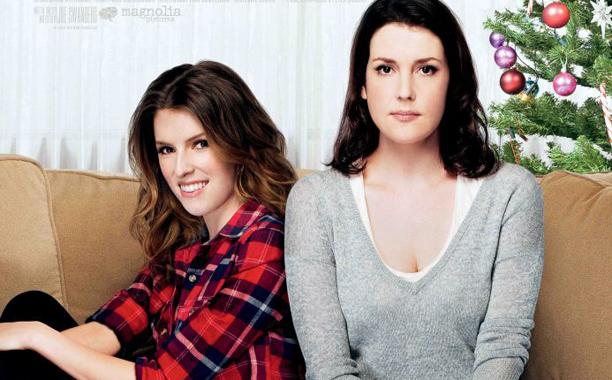 I’m not sure if Director Joe Swanberg intended for Happy Christmas to pass The Bechdel Test, but I’m happy to report that Happy Christmas DOES, indeed, have two women in it (that have actual names) who talk to each other, about something other than a man.

This is yet another Swanberg film that is essentially about nothing; not that nothing happens, but—there are no huge traumas or obstacles to overcome. It’s just about … life — which is honestly refreshing, and makes me grateful that directors like him exist. It is SO nice to watch a film about a couple that is just dealing with every day stuff: no cheating, no big fights, no earth-shattering revelations. Just regular, every day, figuring things out, stuff.

Jeff (Swanberg) & Kelly (Melanie Lynskey) welcome Jeff’s sister Jenny (Anna Kendrick) into their Chicago home after a breakup. While there, Jenny makes some not-so-great decisions—like we all have—but ultimately befriends and teaches Kelly more about herself and what she needs to be happy—namely a break from raising her son, Jude (played by Swanberg’s son. omg. This kid! So cute.) so she can start writing again. And in return, Jenny starts to figure things out too.

Lena Dunham provides additional support as Jenny’s friend, Carson, which means there’s even a third female character who passes the test! That’s not to say these three women never mention men, but when they do, it’s in terms of how Jeff’s career affects Kelly (or, more hilariously, in terms of what to call a penis when writing erotica). And even though Jenny hooks up with Jeff & Kelly’s sometimes nanny, Kevin (Mark Webber), he doesn’t even get a single mention when the women gather for beers.

In fact, the men in this story are mostly viewed on the sidelines here—which I hate to say feels like a RARE treat. A film about two women? Who aren’t embroiled in a bitter rivalry over a man? Who actually, like, TALK to each other and support each other and help each other figure some things out? NO WAY. WHAT. I DIDN’T EVEN KNOW FILMS LIKE THIS EXISTED.

Obviously I’m exaggerating (a little bit), but watching this film did feel different than watching any other movie. A lot of credit is due to Swanberg for a) gathering an amazing cast, and b) letting the story unfold organically so it feels authentic. Even though it’s about “nothing”, it made me think a lot—and keep thinking—long after I watched the credits roll.