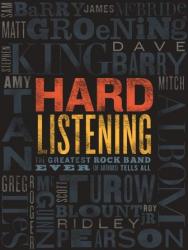 Hard Listening: The Greatest Rock Band Ever (of Authors) Tells All

Hard Listening is the biography of a rock supergroup (consisting mostly of best-selling authors) that lasted for twenty years (playing to audiences that consisted mostly of librarians). Hard Listening is an experiment in multimedia literature, with interactive quizzes and video clips in addition to the standard interviews and essays. But really, at its heart, Hard Listening is a love song to a woman.

Kathi Kamen Goldmark wrote several books. She also owned a record company, played in bands, taught preschool, and ran a business supporting authors on book tours. A woman of endless energy with a wicked wit, Kathi seemed to know everyone in the literary and music worlds. So when she got the idea in 1992 to raise money for charity by gathering best-selling authors to play classic rock (badly) at a book fair, she had all the right connections.

The writers she got for that show – among them Stephen King, Amy Tan, and Barbara Kingsolver – had so much fun, they made the band a regular thing.  With an ever expanding and rotating cast of authors, The Rock Bottom Remainders (a publishing term for books that don’t sell) toured like a real band and performed their schtick until Kathi’s death in 2012.

It was a rule that no one with talent was invited to join, although one member of the Byrds managed to sneak in, and a couple of professional “ringers” were usually on stage. The name of the book comes from one member’s quip that they sounded so bad their music was hard listening instead of easy listening. Punny title aside, Hard Listening isn’t a very writerly book. Instead of carefully wrought prose and elegant metaphors, there are fun interactive quizzes and a challenge to identify which of four pieces of fiction was actually written by Stephen King. (If, like me, your device cannot handle the audio & video components of the book, you can compensate with the Largehearted Boy playlist.) A running gag about Scott Turow’s spleen made me laugh out loud, as did a story about tear-away pants. All together, this collage of memorabilia forms a picture of aging boomers having a drunken, juvenile good time playing at being rock stars with their friends.

While that description sounds self-indulgent and annoying, the book doesn’t read that way. Through thick, thin, and silly, Kathi’s memory holds the disparate elements of the book together, as she held the band together in life. Reading the essays in Hard Listening, you get the feeling that everyone in the Remainders was a little bit in love with Kathi. By the end of the book, I kind of was, too.

{Hard Listening is available for Kindle at Amazon, and for other devices direct from the publisher, Coliloquy. Photos by Joseph Peduto.}