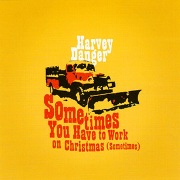 Sometimes You Have to Work on Christmas (Sometimes)

The biggest problem I have with Christmas time is that Jingle Bell "Rock" takes over the radio and for the entire month of December. While the holiday-themed retail bullshit like "Skipping Christmas" by John Grisham is atrocious, the music is usually worse. The stores are usually filled with CDs of god-awful renditions of the carols you hated to sing in grade school — and didn't get better over the ages. The worst are the ill-conceived duets. (Fred Durst sings "The First Noel" with the late Irving Berlin! Yeah!)

Seattlelites should all be thankful this Christmas season that we live in the same town as the amazing Sean Nelson. He always selflessly gives his time to sing at the Imaginary Girls' karaoke parties, he's the best film critic in town, and now the reunited Harvey Danger has given us the year's (the decade's? my generation's?) best holiday record.

Is the new Harvey Danger EP Sometimes You Have to Work on Christmas (Sometimes) the greatest Christmas record ever? Indeed. Is it the best thing to ever happen to Christmas since the birth of Jesus? Time will tell.

The title track tells the story from the first person of a lonely Seattleite stuck working at a, "repertory moviehouse where life is not so wonderful for 15 soggy patrons who have no better place to be (not to mention me)" on December 25." The vocals perfectly capture the alienation and loneliness the ballad and the times demand. The brilliance of HD has always been driven by the songwriting and their ability to capture the perfect metaphor and set it to catchy music.

"I'm working for a holiday wage.
My family is two time zones away.
I'm supposed to call them.
My vodka and snow is melting.
The alcohol isn't helping."

The rest of the EP does not deal with the holidays at all, but still consider it a Christmas gift from one of Seattle's premiere rock band: a live recording of an old favorite ("Jack the Lion" from Where Have the Merrymakers Gone?) and some other rarities. The gem here is the demo of "Wine, Women, and Song," which has been played live and is, according to harveydanger.com, scheduled to be on their forthcoming LP. Yey!