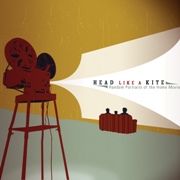 Random Portraits of the Home Movie

For decades, people would record the daily lives of their families with Super 8s. Random Portraits of the Home Movie is a mesmerizing collection of musical tracks recorded by Sushirobo guitarist Dave Einmo under the moniker Head Like a Kite, in which Einmo uses reels of old Super 8 movies from his own family as a compelling sonic layer, providing oddly-dangling narratives throughout the elegant or rocking guitar-keyboard textures and perfectly produced percussion.

The record also features many semi-pop cult celebrity collaborations, including the vocals of Smoosh member Asya on the very groovy "Noisy at The Circus," a sensual duet Graig Markel and Barbara Trentalage (from Crooked Fingers) on "A Dime and a Cigarette," and drumming from David Weeks (from The Cops and Kinski) and Darius Minwalla (from The Posies), who shudder and slam on several songs, including the scratch-infected (and infectious) "Words of a Friend," and the vocoder-enhanced "Your Butt Crack Smile."

What Random Portraits lacks in linear, coherent songwriting it makes up for with hypnotizing atmosphere, blending 80s electro keyboards with jittery, mechanical guitar playing, and a vibe of Krautrock minimalism. "I wanted to take the random ambience you hear outside and record it into my songs," explains Einmo in the bio on the Pattern 25 website. Thus, it takes a while for the unique flavors of the album to be fully absorbed by the listener. Another element that makes the experiments so compelling is that they are kept in a framework of around three minutes in length because of the time-structure of the Super 8 films. This forces a pop song-length formula on some pretty out-there six string effects and analog freak-outs.

When Head Like a Kite plays live, the Super 8s used in the creation of the album are mixed in with the audio performance, and they will be touring consistently over the next few months (tour details available over on the Head Like a Kite MySpace page).