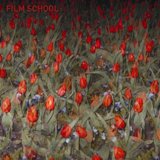 By about the fourth songs on Film School's self-titled debut on Beggars Banquet, it becomes painfully obvious that frontman Krayg Burton spent most of his teenage years singing Cure songs in the shower. But, what with all the buzz and hubbub from pop-media elitists such as NME, Music Week, and Jane Magazine, this San Francisco fuzz-rock band seems poised on the doorstep of breakthrough. Like recent up-and-comers Arcade Fire and TV on The Radio, Film School have managed to turn our collective heads with a sound which successfully combines at least four decades worth of influences into sublime pop confections.

And what a better label to take on this ethereal rock bliss than the one who introduced us all to the likes of Gary Numan, Bauhaus and Love & Rockets? The UK label Beggars Banquet has always had a penchant for taking on extremely gifted, slightly left of mainstream artists, and Film School should have no problem fitting right in.

Like a collage or (pardon the Bush-ism) "human-animal hybrid" of genres, there are moments where you will swear you are listening to a more indie Echo & The Bunnymen. Similarly, you'll have to look at the CD packaging on more than one occasion to remind yourself that you are not listening to a Robert Smith collaboration project with either Mogwai or Kevin Shields (although that would kick ass). While songs like "Sick of the Shame" bring to mind the transcendental gauziness of Slowdive, laced throughout the record you will also hear throwbacks to 70's psychedelic bands such as The Who and Pink Floyd.

This is not to say that this record is "derivative" (my new favorite buzz-kill word), but rather that it is familiar, albeit dressed in new clothing… most likely tight pants with white belts. Familiar is a good thing when you can do it right.

I'd be damned surprised if these guys weren't invited to play on Conan O'Brien within the next six months.