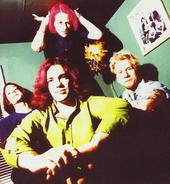 Oh, Has the World Changed or Have I Changed?

It was a week of nostalgia for Imaginary Girl Dana, with the Flock of DJ sponsored Smiths-fest at i-Spy, including all-star Smiths cover band, The Unlovables… plus — a pocketful of Posies fans at the Fremont Fair….

What's this? A DJ playing all Smiths songs, all night… and a Smiths cover band, too?? My God. I raced down to the I-Spy, and called all my friends. Though I know I wouldn't need to; they would already be there.

Ahh, so many familiar faces from the BritPop/Parklife crowd. Friend of Imaginary Girls Steven even wore black eye-liner to commemorate the occasion. Ahh, remember when the tall dark and tortured ones used to wear black eyeliner…? Sigh.

I had to find out more about this Flock of DJ character, and to thank him for organzing this amazing event. Turns out he was none other than KEXP progressive Global Music DJ Darek Mazzone. So what's Mr. Wo-Pop doing spinning brit-centric eighties new wave classics?

Turns out, Darek has a mission: to make life in Seattle a little more fun! "I started the "Flock of DJ" nights with one intent. To have fun with Seattle nightlife. Everything is so dry or super serious now…. In Dance culture today there is a sameness that is pervasive. Whether it's House, D&B, 2-step. Techno. It's the same identity. You put on a uniform of that genre and go play. Sheep."

"I'm not one to wallow in nostalgia," he continued – and for those of us who have heard his show, Wo-Pop, this is evident. "But…. in the 80's or very early 90's… all you had was personality. Bands like the Cure, Duran Duran, Happy Mondays, and Bauhaus were trying to separate themselves from everyone else. Dress, attitude, dance style was a form of unique expression. In throwing the Flock of DJ parties I want people to be inspired and encouraged to create events that will stand out from the Flock."

Luckily, Darek "Flock of DJ" has many more events like this planned, with the next one set for July 25th at I-Spy: a Cure vs. Duran Duran fest. An auspicious choice of days indeed… happens to be the birthday of one certain imaginary girl (read as: me!). And I'm not officially saying that my huge Leo birthday extravaganza is going to be there… not quite yet… but then, you're not hearing me deny those rumors, either…

But wait! I still haven't told you about the best part: The Smiths cover band…

So I don't know about all of you, but I never got to see the Smiths play live. So seeing a Smiths cover band was still quite a thrill. And now I'm Still Ill. Hee hee. The Unlovables made me so elated, I was giddy.

According to Bo, Sean is the one super-Smiths-fan in the band, and the one who was best prepared for the show. "He had been preparing for the moment since adolescence," joked Bo. This was evident from Sean's performance. He crooned, we swooned — and danced — and he gushed about Morrissey's last show, telling us all about his personal triumphs there. Apparently, when Morrissey did his ceremonial doffing and tossing of his shirt, Mr. Nelson was the lucky recipient. But no, Sean wasn't wearing the prize that night.

The only (slight) regret of the show was it's length — only seven songs (one of which they performed twice "Big Mouth Strikes Again," because the audience begged for an encore…) What gives? Turns out the band had just cause for the short performance; turns out, they had only been playing together for four days!

Apparently, The Unlovables shot for ten songs, and ended up with seven ("Bigmouth Strikes Again," "Stop Me If You Think You've Heard This One Before," "The Boy With a Thorn in His Side," "Last Night I Dreamt Somebody Loved Me," "Shoplifters of the World Unite," "The Queen is Dead," and "Unlovable" — with the final one obviously the inspiration for the band's moniker).

"Smiths songs are really hard — harder than you'd think just listening to them. Mike and Bill had the toughest jobs because Johnny Marr is just a fantastic guitarist, and he uses all kinds of alternative tunings and studio tricks to fill things out," said Bo. "On top of that, it's very hard to find any kind of sheet music for the Smiths so we had to just play the records over and over and figure everything out by ear. Easy enough to do, say, with Green Day, but quite difficult with the Smiths' intricate arrangements."

Okay, okay, I guess we can forgive them. And besides, once they were done playing, Flock of DJ came to the rescue with… you guessed it! More Smiths. It was astonishing to me how long I could digest a steady diet of Smiths, and still remain hungry to hear more.

Speaking of which… will we have a chance to hear The Unlovables again? Sean declared that they'd received two offers for future gigs that night… so perhaps? But then, Bo made a good point; "Playing in a cover band is a little weird for people who spend so much time writing and playing original music. It's a little like going over to the dark side." Ahh, indeed!

It's a paradox… want to hear Smiths cover band… yet want all these uber-talented boys to keep writing and performing music of their own… what's an Imaginary Girl to hope for? Lame though cover bands might be, I am hoping to hear at least one more reunion performance. And speaking of bands who like to reunite…

The Posies were always one of those bands that sat just below my musical radar. I knew I *should* adore them. I love indie-pop. These guys are the kings of indie-pop. Yet somehow, I've missed performance after performance… and final tour after final tour. Luckily for me, these guys never seem to actually break up… so I FINALLY saw the Posies.

Unfortunately, they played at the FUNC space during the Fremont fair. The acoustics were awful, the speakers so overblown that the lyrics were undeciperable, the guitar muddled, and so painfully distorted and blaring that my ears ached for two days afterwards. But poor circumstances notwithstanding, these guys were great. Jon Auer and Ken Stringfellow may have been playing together for well over a decade, but the songs sounded fresh, clear, gorgeous; the exuberance with which they played, sincere. Unlike so many bands that have endured (and endured, and endured), the Posies continue to play with unfeigned ferocity and passion. Which I suppose, is why this duo continues to
continue on. Lucky me, and lucky Seattle.

For those of you who missed this Posies reunion, you have two more chances in July: Sunday nights the 7th and the 14th, both at the Showbox's Green Room. And if you miss these dates… hell, just wait until August; there'll probably be more.