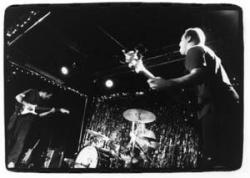 We're not much for fireworks. So instead of staring skyward this July 4th, imaginary girl friend Marlene and I headed to the Wasabi Bistro (not that place again!) for sustenance, and then arrived at the Crocodile to hear local up-and-coming band Yeek Yak Airforce. There we were, music reviewers with pens and pads in hand, ready to hear the show!

We were really excited to hear YeekYak Airforce. We've been hearing a slow and study buzz about this band — including that producer-demi-god Phil Ek had produced their upcoming debut release. Our curiosities were piqued. We entered to a really good live band, only to realize…. gack! It was Yeek Yak and they were on THE LAST SONG, and that's all we heard. And great regret indeed, for what we heard sounded phenomenal. Damn damn damn those tasty sushi rolls and our assumption that they would be the headlining band!

Then we had to go tell the band that we missed their set, which made us feel really cool. Luckily, drummer Mike Bundy was a super-nice guy, and agreed to talk with us, as well as get us a copy of their up-coming CD to review. I asked the most obvious first question: what does that name mean, anyways?

"We had been playing together for about six months, with no name, and were panicking because we were about to play some live shows," he said. "So Ollie had an imaginary friend named 'YeekYak' when he was a kid, and he thought about printing t-shirts that said 'YeekYak Airlines.' Then we decided 'Airforce' would be better, and that it worked as our band name."

So there you go. An band named for an imaginary friend! How could the Imaginary Girls not love this story? And the cutest continues…

"Ollie and I have been playing together since the seventh grade," continued Bundy."We even won our high school talent show."

That might be the cutest thing I've ever heard…

After high school, Bundy met and played music with guitarist Mark Johnson in college in Savannah, Georgia. Bundy then moved back to Seattle (and back to play with childhood friend Ollie, aka Oliver Stephen Byrd, bass player and vocalist). But according to Mike, having just a drummer and bass player wasn't really interesting enough to be a band. Then — happily — Mark moved to Seattle, and the-unknown-band-soon-to-be-named-for-imaginary-friend-YeekYak was born.

Thankfully, this music is as great as the band members are cool. How awful would we feel if we 1) missed the show 2) got an advanced copy of the CD and then 3) had to give it a poor review? That would have sucked. But look out Seattle… this CD is great. It sounds consistent with what I heard live: really catchy driving alt-rock.

If you're a fan of the "764-Built-to-Mouse-Spill-Phil" flavored Pacific Northwest sound, it will be nearly impossible for you not to love this album.

I really loved the song "Iowa;" it made me feel reminiscent for roadtrips and daydreams. The drums drive like the steady forward hum of an engine; you can hear the seventy mile an hour force of fresh air breaking against the windshield, against your face through the open window. The lead guitar dabbles like errant thoughts on the open road: driving, peaceful but forward moving, with a destination in mind, but with a lovely repetitive force that makes you love the journey towards it even better. Then at the end, Ollie shakes you out of your musings, proclaiming, "Have you seen Iowa?" Sweet!

Sorry this is more of an interview and album review than a show review. I'm mostly sorry because hearing the CD has made me even more curious about what they sound like live.

Luckily, we met some lovely people at the show who had far better timing than we did. So we're going to let them tell you more about it…

"Mark the guitar player, he's the one you want to look at. But the drummer also has a great look on his face – like he can't believe he's keeping time. Kinda porno-style." …Bishop (ArtCore Studios)

"It was like returning to the womb and bringing punk rock with you." …Matt Benham (Argo)

"I think Mark looks like Bruce Springsteen. They were very innovative and different." …Justin Benson (Argo)

"I thought they were exciting and avantguard. The feedback-inspired sound was really great. And the lead singer is the funniest guy ever. And Mark DOES look like Bruce Springsteen." …Ian Edwards

"YYAF, they're like sandpaper for poison oak. They remove the itch, but exacerbate the problem." …Christopher Gay (ArtCore Studios, and incidently, official tattoo artist for the Three Imaginary Girls. Yay Christoper!!)

YeekYak Airforce CD Release party will be August 8th at Graceland, with former-Seattle and now Portland-based The Dutch Flat coming up to celebrate the occasion. Anna Oxygen (ex-Space Ballerinas) will also be opening.

The Imaginary Girls promise to arrive on time — no, early! — this time.

Next up was Volta Do Mar: these guys are devastatingly talented.

These guys are so precise and tight it's like watching a gorgeous algebraic equation set to music. But that's not to imply that they're cold or calculated — they're obviously incredibly passionate and dedicated to their craft.

Have I ever told you my Dire Straits theory? Have you ever noticed how no chicks really love Dire Straits? Their music was just written by boys, for boys. It's not a comment on their talent or lack thereof; it's just a fact. It's true. Ask your girl friends if they like Dire Straits. I bet you a drink that they don't. Speaking of drinks, Marlene and I went to go get some and them came back for…

Marazene Heartbeat Clock! "They fuckin' both fuckin' rocked!" proclaimed Marazene Hearbeat Clock frontman Brett as he seized the mic to start his set. Dude! I guess this was about what I was expecting, as before the show, Dirk the Drummer for MHC informed me that Brett had been tossed out of the Crocodile during the Crooked Fingers show in May. "He got thrown out drunk on his birthday," he said. "But then they asked us to play here a month later."

He continued on to say MHC's sound has been compared to Crooked Fingers… and even Husker Du and the Replacements. Pretty bold statements, and with this introduction, we were expecting a raging rock-fest-o-rama.

Then he starts singing, and he sounds like Neil Diamond…

I really enjoyed this band! They moved from guitar-driven rock rhythms to sweet little kid sounding ethereal melodies… and did I mention that singer? Michael Diamond? Neil Stipe. Gooooood shit.

I have seen keyboardist/bassist Shay Straw (aka the guy in the blue-green hat with the dark glasses) out around the Cha Cha/Linda's area approximately 64.2857 times in the past five months. So I guess it should have come to no surprise to find he is in a band. But what a nice surprise to know it's a good one!