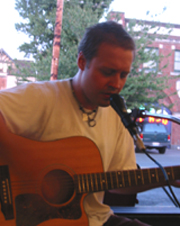 I should have known by now that any band that blows John Richards away like Los Halos did last year should be revered, respected… and of course, PURCHASED as soon as it was released.

But silly imaginary me, I still hadn't acquired the debut self-titled Los Halos CD (on Loveless Records)… and I've already been lapped by the band's sophomore release, For Ramona, just released in 2002. I suck!

But sheesh, at least I had the sense not to miss their Seattle debut, despite my regretful unfamiliarity with their music. One tidbit: according to a perfectly charming Loveless source, this was actually the first Los Halos live show EVER; literally, the FIRST time they ever played all together for a club audience. How intriguing, and what an honor for Seattle.

The turnout was beyond impressive for an opening band on a school night, and man, there sure were lots of boys at the show — including a very special boy, the Imaginary Michael X, writer extraordinaire and whopping Los Halos fan. I commented to him about the favorable male to female ratio (favorable for me, at least).

Far be it from me to argue levels of anguish as they pertain to gender… and, well, who could think or argue about ANYTHING once Los Halos took the stage. Discourse became moot. We were floored, auditorially annihilated by the onslaught of this performance.

This was their FIRST live performance?? I find this incomprehensible — no band should be allowed to be this good its first time out in public. It will intimidate all aspiring musicians moving forward. Perhaps I shouldn't reveal this rumor to anyone, in an effort to keep our aspiring musical community afloat…? {oopsie, too late}

Los Halos played loudly, astonishingly loud, LOUD. It's difficult for me to draw a comparison; their music reverberated, it howled, it wailed, and devastated. I heard influences ranging from punk rock to bluegrass… to a post-apocalyptic wall of swirling noise and howling guitar energy reminiscent of psychedelia (without the stinky hippies, of course). Los Halos were truly beyond comparison.

Hearing "You Should Have Known By Now" performed live was particularly chilling. The song began as a whisper, nearly prayer-like, as front man Samezvous started singing that line… that line, that line… For those of you who have somehow managed to miss this song on the radio (KEXP, that is; is there any OTHER radio…?), the song has only one lyric, its title. But it speaks volumes; the song repeats lyrically but crescendos musically during the ten or so minutes it lasts. It's an epic relationship, a curse, a broken dream, a tragedy, and a hope, all wrapped in six simple syllables. I felt spent by the time they finished.

Los Halos have no business being an opening band. They filled the room with such presence, such power. Did anyone stay for the two bands that followed? I wasn't able to stay, and I can't even fathom another band following this performance.

I heard that Samezvous played an opening acoustic set before Los Halos came on, which I sadly missed (though I did catch his amazing acoustic performance at Victrola the next night). Michael X (superfan) managed to catch all three performances. His errant thoughts…?

"While the technical energy was great during the full Los Halos show, it didn't compare with the intensity and fervor of the solo performance. When it was just him, his passion and isolation were so much more powerful, so complete," he said.

I just don't see that this is possible. Perhaps this was Michael X's way of punishing me for being late and missing the opening act…? Was this my penance for not having purchased the CD sooner? Being so intoxicated with the performance, I couldn't fathom that it lacked passion or intensity. So I ran over to the merch table and bought myself a CD (the first one — figured I needed to catch up, and I didn't have enough money for both! Damn!), and started playing it as soon as I got in my car…

{{even though he usually does.}}