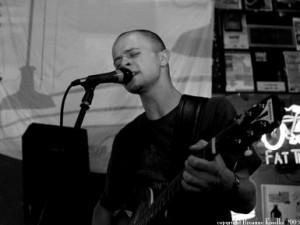 Has Seattle ever been this hot? And no, we're not talking about the un-Seattle-like broiling temps — we're talking about all the amazing live shows we've seen so far, as well as the great shows we're looking forward to in the coming weeks. Sizzle, I say!

Argo has long been an imaginary favorite, so we were thrilled to sponsor the release show for their latest EP, The Needs (Ana-Them records). And what an extravaganza the night was! In addition to new Argo music, the night also celebrated the release of local artist Joe Alterio's comic book 365, and featured antics of the Audiopoet, DJ Bruce Leeroy, and the disco-down-ability of local band Pleasurecraft.

And let's not forget about the Seaworthies. Straight outta Kennewick, Washington, the Seaworthies were the super-cool surprise highlight of the night for me. The boy/girl duet were just wacky and unexpected in the best of ways with their dreamy sort of lo-fi electro-pop. Don't be sad if you missed the show. The Seaworthies be playing at the Slender Means CD release show at the Crocodile Cafe on August 27th {see our recommended upcoming shows, below}.

I sadly missed all that was the Argo EP-release show, but I had a blast at the Math and Physics Club EP release show.

MAPC just released their second EP Graduation Day on Matinée Records, and the show was just another testament to their (incredibly well-deserved and fast-growing) fanbase. Which is my long-winded way of saying: the show was packed, and the atmosphere at the all-ages show was positively jubilent.

TIG-fave Tullycraft opened with their hand-clapping sonorous sing-along vocals, and the Salteens from Vancouver closed the night. From the piercing four-part a cappella opening notes of their set (our friend Steve charmingly called them, "tighter than a Bangkok lady-boy"), the Salteens surprised (and thrilled) the crowd with their shit-tight harmonies and stage presence galore. Despite being the only non-home-towners on the bill, the Salteen's managed to keep people out late on a school-night, and earn themselves an encore to boot. No easy feat in these parts…

Our new all-ages friend Justine from Mercurial Sound came to the show and wrote a few kind words about it. In her own words, "Tullycraft sounds exactly like summer would if it had its own album. With perky melodies and guitar riffs, and vocals that sound just like that cute neighbor boy who’s got a surprise, Tullycraft brings out the exact same feelings, for me at least, as games of capture the flag, neighborhood barbeques, and riding the fast rides at the town fair. Okay, I probably wasn’t singing along to "Fuck Me I'm Twee" in my capture the flag days. The feeling though, was the same, and probably more fitting than capture the flag in a 17 year old’s summer vacation."

It's funny 'cause it's true! Do check out Mercurial Sound. It's a great run-down of the all-ages scene in Seattle…

You'd think that I would spend a bulk of this article talking about how much I cried at the beauty of the Teenage Fanclub show {8/3/05, Neumos}. But actually, that show rather paled in comparison to the Boat show a few days prior {7/29, Mars Bar}. Boat charmed the fairly packed Friday night Mars Bar audience with selections from their limited-edition first album, yet-to-be-released EP and a few covers (including but not limited to Neil Diamond and Velvet Underground songs).

Our posse was so taken by their catchy lo-fi Shins-esque vocals and smart quirky lyrics that we couldn't help but handclap back-up parts from the first and second row positions we had staked out. They combine early Kinks know-how and beef it up with Graham Coxon moxie. The end result is clever, earnest, and damn catchy. Boat even when the extra mile with their construction paper cut-out stage decorations and a drummer with a paste-on moustache.

It has been a while since I have been as excited for a Monday night show than I am for this Monday, August 22nd at Chop Suey {again, see our recommended upcoming shows, below}.

Now that you've finally gushed about your love for all things Boat, are you finally going to tell everyone about your travels now, Liz…?

Holy cow — yes! I just got back from the Athens PopFest. I was there last week for a two-day portion of the four-day festival. It was organized/presented by the swell folks at Happy Happy Birthday To Me Records. Huge thanks to Mike and Eric who really outdid themselves putting together quite the sampling of today's indie-pop community.

I came back with a whole new pile of bands to love, like Fabulous Bird, the Mega Hurts, the French Horns, and the Smittens.

You should read my entire Athens Popfest rundown to learn all about it.

You really should read it. It's the best place I know to meet your newest twee infatuation.

By the way, did you see TIG mentioned in the September issue of Spin magazine? Right there on the first page of the cover story on Death Cab for Cutie?

Okay, so maybe they didn't *spell out* www.threeimaginarygirls.com, but I got a qu
ote in there and that is enough for my mom to tell her bridge group about. That's me! "Liz Riley, Deathcab fan."

And in case you live under an indie-rock rock and somehow missed the news, the official word on the street is that on August 30th, Death Cab for Cutie will release their sixth full-length album and major label debut, Plans, on Atlantic Records. Tickets for their Seattle performance at the Paramount on November 18th go on sale this Saturday, August 27th.

Could we be more excited? No. Especially for Liz, world-renown DCFC fan.

Speaking of excited, let's talk about upcoming must see shows. What pre-Bumbershoot shows are you two looking forward to?

As I already mentioned above, Boat is going to be playing with another one of our local loves, the Elephants, and Barsuk's Little Champions on Monday, August 22nd. Rumor has it Boat will finally have some t-shirts and copies of their first and second releases for sale… both of which are fit for display on your mantle. Don't get me started on how those Boat guys know how to wield a glue gun.

Just look at this album art. When was the last time you saw such craftsmanship, I ask you?

I do love me the Boat. I'm also looking forward to the Portland lovefest at the Crocodile on August 25th, with Tea For Julie, Derby, and The Village Green. You should go out to celebrate that three of Portland's finest are making the I-5 northly trek simultaneously.

On August 27th, you have a dilemma: It's the Slender Means CD release show at the Crocodile. Their debut full-length Neon & Ruin is breathtaking, and their live shows are always incredible. The Crystal Skulls and the Seaworthies are also on the line-up.

But then over at Chop Suey, it's the Fruit Bats album release, with an incredible local lineup rounding out the bill: Dolour, Lillydale, and Ghost Stories. Shane Tutmarc from Dolour told us that this will be Dolour's last show of the year, as they're busy writing and recording, preparing for the release of three (3!!!!) new albums. According to Shane, the show will feature almost all new material too.

It's like, which show's more historically significant? Dolour is hard to resist… but the Slender Means new release is amazing. And both shows have such great supporting line-ups too… especially that Fruit Bats show, with Ghost Stories (great indie-pop from members of Mines/the Joggers), and the lovely Lillydale. It's not like you have much chance of show-hopping. I wish we knew how to guide you on this one, imaginary readers.

At least there's no such quandry on August 31st. You must come to Chop Suey to witness the debut of Daylight Basement. The band, which started off as a lo-fi electronic project of Bre Loughlin from Kuma, has fleshed out into the most promising lineup we've heard in ages, featuring Bre (guitar and vocals), Dejha Colantuono from Rotten Apples (bass and vocals), David Bos from the Jeunes (guitar), and Davis Martin from Maktub (drums). Move over, New Pornographers — looks like Seattle has a super-band of its own now!

If that's not enough to get you outta the house, Seattle's favorite dance sibs the Long Ranger and EMI recording artist the Juan McLean round out the bill. Come witness what just might be Seattle musical history in the making {and dance/sweat/party in the process}.

See you at a show, suckas!