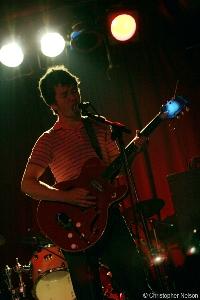 Featuring BOAT, the Elephants, Calvin Johnson, The Decemberists, The Long Winters, and more {thru 8/31/06}

As expected — last Monday (August 22) was a late night. Boat headlined a night worth missing a good night's sleep over.

It was a wonderful and late night indeed. Before we launch into the details (The Elephants! Boat!), I'd like to discuss an issue in our imaginary community: the four-band bill. This phenomoenon that seems to be taking over Seattle shows. We have always maintained three is the magic number…

Four-band bills should be outlawed — especially for Monday and Tuesday night shows! Four bands on a Monday or Tuesday night?

But I can play their little game. Here are my top four reasons against four-band bills…

Not to mention that it's unfair to the bands. Who wants to go on at midnight on a Monday? That isn't fair — especially because the band that plays at midnight is carrying the most burden for getting people to stay out…

Luckily, the Elephants and Boat made it worth staying up so late. The Elephants self-titled debut release is literally one of my top three {magic!} records of the year so far, local or otherwise. It's beautifully produced, with a diverse sound reminiscent of morsels of so many of my favorites, including the Magnetic Fields, Echo and the Bunnymen, and the Shins. The release sounds so pro I'm still astonished that we lucky ones in Seattle are some of the few peeps in the whole world who know this band yet. It feels nearly as iconic to me as Songs to Learn and Sing.

Live, the Elephants are wee bit sloppier (in the best of ways), endearing, and incredibly mobile. The three members effortlessly flip around the stage and the instruments, sharing the microphone as well as their instruments {in fact, their MySpace bio, all three band members (Trevor Dickson, Jason Freet, Cody Jones) list their band duties the same: "writes songs, sings, plays instruments."} Most bands who employ these Sebadoh stage sharing antics tend to bore/annoy me; I generally pick a favorite front man and get irritated each time I have to wait for another rotation. But in this case, each player brings such strength and ingenuity to each role, it feels simply joyous and exciting to watch them move about.

I can't say enough positive things about the Elephants.

I feel the same way about Boat!

I know! It's like the booking gods looked kindly upon the imaginary ones and consolidated our two favorite lying under the radar Seattle bands onto one imaginary-worthy bill. Well, except for the four-band-late-night component (not to disparage Ed Wang or Little Champions in any way! We're not grumbing about the bands — the bands rock! — we're grumbling about the system.)

Boat just keep getting better and better. Of all the times I've seen them, this was by far the best they've ever sounded. They were fuller and each peppering point of clever instrumentation really stood out.

Plus, tonight they brought Saundrah Humphrey from Math and Physics Club. The addition of her violin to a few of their songs sounded AMAZING.

Um, can we talk about the Boat encore? An encore on a Monday night after midnight?!

Totally! This was my first live exposure to Boat, and while they impressed me with their rolicking charms, quirky yet catchy melodies, and incredible sense of FUN, what impressed me most was that they got a true encore.

And cutie Trevor Elephant joined them for the encore and was so caught up in it, he slammed the maracas to the floor so they smashed in a brillant display of Boat-rock grandeur.

Then post-encore, the crowd attacked Boat with pleas for them to open the merch booth. A quickie Boat store was assembled at a back table, and by the time the feisty gang cleared the area, I think they sold out of small and medium t-shirts and were left with just scraps of CD wrappings.

The audience was so hungry for more Boat, the handmade EP's just weren't enough for the ravenous crowd. Our little local band is getting all grown up!

Just when you think folks would be conserving their energy for the big Bumbershoot weekend, the calendar forces have put together a hectic week for those of us looking for a hip-happening time (ed note: I am not promoting or even condoning the use of the term "hip-happening").

Anyhow, our imaginary boy friend Lorenzo is always my consultant for all things political. When we were approached about the Dwight Pelz fundraiser, I immediately consulted him if he thought the candidate was worthy.

How was that for a "yes?" So, we're incredibly proud to support this candidate, and would love to see you at the event. Learn more about it here.

As we mentioned last week, you

The backgroud: Daylight Basement started off as a lo-fi electronic project of Bre Loughlin from Kuma, has fleshed out into the most promising lineup we've heard in ages, featuring Bre (guitar and vocals), Dejha Colantuono from Rotten Apples (bass and vocals), David Bos from the Jeunes (guitar), and Davis Martin from Maktub (drums).

Kuma fans will be relieved to know they can still hear the dazzling vocals of their favorite chaunteuse {Bre has left Kuma for Daylight Basement — more news about that coming soon to your favorite imaginary website}. But Daylight Basement definitely takes a different direction from Kuma. The songs are playful, poppy, with a bit 80's nostalgic and some of the most brazen hooks I've heard. I've had a chance to hear a few of the demos, and they're stuck in my iPod as well as my brain.

If that's not enough to get you outta the house, Seattle's favorite dance sibs the Long Ranger will follow Daylight Basement. Check out Ted from Long Ranger's sweet break dancing skills. He makes the music and then he dances to the music he makes. They're the ultimate DIY party band. And they own two-fifths of the songs on my "Shake your Ass" iPod playlist.

Rounding out the bill is EMI recording artist the Juan McLean. Come witness what just might be Seattle musical history in the making {and dance/sweat/party in the process}.

On Thursday (September 1st), Calvin Johnson will be commuting up from Olympia to make the Queen Bee toting set giggle and groove with glee. I've got my fingers crossed that, in the process, he will also debut some material from his upcoming release, Before the Dream Faded… (currently scheduled for release October 25, 2005).

Also on the bill is Anacortes, WA's own Karl Blau. Like Calvin, Karl has earned a heap of art-indie-Olyfolk cred during the course of his K Records affiliation. His brand of lo-fi is dark and naïve, while sneaking in complex hooks earning fair comparisons to the Microphones.

In pure Calvin style, even the venue locale is on the quirky-cooler than thou side. This time the Church of Beat Happening disciples will gather at the SS Marie Antoinette to revel in all that is "sparse genius indie avant-garde folk rock". In case you're like me and haven't made it over to this place yet, the SSMA (which isn't really a boat, but rather a warehouse) is located at 1235 Westlake ave N, just off Lake Union. It an all-ages show, so you can leave the floatation device AND the fake-ID at home.

And then… there is Bumbershoot. Bumbershoot is the bulk discount superstore of live music. It's so great that so much is in such a concentrated area but if you don't have a schedule (i.e. shopping list), in can be overwhelming and soon you're buying a 10 gallon bucket of soy sauce when all you really needed were razor blades. And it's so cheap! If you're really strong and you get a four day pass, it equates to less than three dollars a band and that's not even counting the great unmusic related events.

But just like Costco, there are huge lines, shoulder to shoulder people, and a scarcity of booze at the exact moment you need it most. Consider yourself warned. I'll be front and center on aisle five… erm… the mainstage for the Decemberists on Monday afternoon. Like I said in our Tablet article, the Decemberists are the Northwest's epitome of drama-pop bands. {imaginary aside: just in case you haven't heard, Tablet closed its proverbial doors. September is their last issue. So sad.}

Regardless of the fact that I am going to be out of town over Labor Day weekend, I've still found myself on the Bumbershoot website ewww-ing and ahhh-ing over this years line-up. There are so many obvious and not-so-obvious must-sees that I get dizzy trying to put together a game plan of recommendations.

Aside from who to see when, I think the best Bumbershoot advice I could give is to repeat a line that came from our Film Editor, embracey, in his 2003 Bumbershoot / One Reel Film Festival recap: "Sneaking out Monday for a late luncheon at the Bamboo Garden. OK, it really has nothing to do with Bumbershoot, but holy fuck, I was *through* with that crowd! So I got my wrist stamped with that weird special ink and trotted over a few blocks to Roy Street for some of the finest vegan pan-Asian food in town. It was just the breather I needed."

And if the whole mayhem at Seattle Center thing kicks off your misanthropic tendencies, it's always interesting to see what venues do to compete with the enormous fuss that is Bumbershoot. If you're feeling that way, I would recommend…

In between rock shows and chowing down on Bumbershoot roasted corn, you've got to make some time to catch a James Dean film or two. The Northwest Film Forum is showing two of Dean's three films in September. Rebel Without a Cause will be showing September 2-8 and East of Eden will follow with showings September 9-15. If you can make it to the September 2nd, 7p showing of Rebel, Oscar-nominated screenwriter Stewart Stern will in attendance!

This just in! We confirmed our "Guest-Bartendership" at Hattie's Hat for Monday, September 12th! Three Imaginary Girls love to start the week off right with a libation-fed hang-out session with our friends, and what better place to do it than behind the bar, serving drinks? We've already started scheming up some mix cd raffles and we've confirmed the evening's drink special; the TIG {Absolut Madrin, soda water, lime} will only be $4!

We'll be behind the bar from 8p-10p so bring in your empty tummy (in addition to an imaginary drink special, there's a burger/fries special) and wear your lucky raffle-winning shirt. Don't be scared — there isn't even a cover charge!

Oh — one more very exciting local music morsel before we go. This just in from the Barsuk website:

The Long Winters will have
a new CD-EP coming out, ultimatum, on October 11. A new full-length will be released in early 2006. Catch the Long Winters on the road in late September with Keane.

While you're awaiting the release and the tour, you can download a new Long Winters song. In fact, it's the title track. Have a listen.

We think you're pretty!