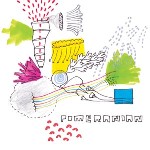 Nate, Emory, and David of Pomeranian take their seductive time with most of these six songs — a keyboard trill leading to boyish hums and background thrushes in "Kaboom"; then on the next track, "Sound Cloud, No. 1" delivering an Attention Deficit Disorder elevator-dystopian shuffle, a confident sound collage made up of original, hip-hop and jazz based riff-shifting.

They did not one win the title of cutest band in last year’s Seattle’s Cutest Band Contest (3IG Liz: "They were cuter than Pocky, pink peeps, and, well, Pomeranians, combined and 3IG Char: "They‘re certainly a band to be followed, seen, and heard"), but Pomeranian is as intelligence-exhibiting, buoyant, and cocky as its canine namesake. They’re the kind of ideal, commanding trio to have played at last February's Capitol Hill Arts Center’s "Beep Repaired SEE-SAW Festival," in the center of acts such as the fantastic Transmissionary Six and The Pharmacy.

David was in a band called Wimbledon, and this kind of music is described as "thrift-rock explosion! Glorious sweaty mono!" on its website, which gives you a pretty good idea of what's going on. They obviously know what they’re doing — it might remind Seattle music fans of the "original karaoke" sound of the Long Ranger. Sounds created specifically for artful body movement. Music for the brain to dance to; gravity perceived as a challenging stimulus.

Even though a Pomeranian is a smart dog, it is also a vivacious one, and these guys probably know how to bring this stuff to life when performing it on-stage. On disc, it still has a way to go to be at all captivating, but as Char said above, it's something to look out for.