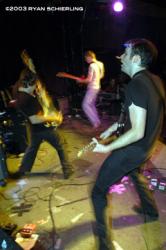 Did you hear about the secret Sean Nelson/John Roderick and Death Cab for Cutie show at the Crocodile??? If not, you weren't alone… but damn, you missed a great show…

A little history on my "secret show" conundrum {or if you'd rather skip my theory tangent and read the show review, go on ahead…}

Couple of years back, I wandered into the Croc on a Tuesday night to catch the Minus Five. Hordes of people filled the bar, and I was puzzled; why on earth were there teeming crowds on a Tuesday? Upon taking the {last available} bar stool in back, I had my mystery answered and one of my greatest adolescent fantasies fulfilled: the Minus Five would be opening the night for **R.E.M** !!!!!!!! Omigod, omigod, omigod, I was about to see Michael Stipe in the drunken, smoked-clouded, raucous setting I'd missed back in the day!

It was a genuine surprise, and it exceeded my every expectation.

This Labor Day weekend, rumors began flying of yet another REM show at the Croc, this one post-Bumbershoot. I was excited, but the amount of pre-show hoo-hah and lack of pre-show tickets made me reluctant; by the time the day rolled around, even commercial radio stations were outing the event. Fearing the crowds and not wishing to dilute my original experience, I avoided what I heard were obscenely long lines and passed on the night {sadly though, as three of my favorite local bands — Visqueen, the Turn Ons, and King of Hawaii — were playing} and you know what? REM didn't play.

Was it because their surprise had already been outed? I'd like to think so. My own personal moral of this story: if you're planning a secret surprise show, make sure it remains a surprise…

Barsuk Records planned a little surprise for all of us: a Death Cab for Cutie/John and Sean from the Long Winters intimate Monday gathering, to raise funds for Treehouse, a local non-profit that provides care and tutoring for foster kids.

Interesting thing was, they sorta forgot to tell anyone. So we had the reverse REM situation — hugely popular superstar bands playing intimate, rock-n-roll venue, with no teaming crowds. This is where I am torn… was this really unfortunate or just more unexpected?

I'd say just unexpected. I arrived early, camped out in front of the stage and limited beverage intake to prevent mid-secret-show dash to the loo that would surely result in a loss of front-of-stage spot. And whether or not there was a packed house behind me, it was a great show and a rare opportunity to hear my favorite Barsuk recording artists in such an intimate setting. The vibe was was so lovey I was about ready for someone to break out with "Happy Birthday Liz!"

Turns out, as per always, we needed to say just a little more. The witty banter, the devastating repartee, the unequaled male harmonies and stunning pop-sensibilities, all played out as if we were sitting in their living room surrounded by a few dozen of our favorite friends (!)… how could we not write more?

I always love seeing the John and Sean show — featuring pared-down versions of their Long Winters songs. It's amazing to hear the perfect simplicity of brilliant song-writing relayed via their incredibly strong voices and minimal instrumentation {tonight's show featured Senor Roderick on the guitar and Senor Nelson on what appeared to be the same mini Casio my sister bought me for Christmas in 1984}.

I don't know if it's his hair, his glasses, or his stage presence — but Sean Nelson is an amazingly overpowering performer. To see him play a child-sized Casio keyboard powered by batteries was such a wonderful dichotomy, I almost peed my pants with delight.

I loved when John proclaimed he hated jazz and blues. *I* hate jazz and especially blues! Reason number 653 of "Why I love the Long Winters." Perhaps we could start a tasty-blues-licks 12 step support group.

You know what my reason number 653 of "Why I love the the Long Winters" is?

This show John was sporting a self-processed "John Denver-esque" look, which prompted Sean's bordering on tasteless banter {"The hair does keep on growing, you know…"}. *Giggle*

I love that hair! One week it is long and shaggy, the next it is short and… shaggy… the next it is long again… and stylishly… shaggy. They should bottle the "Essence of Roderick" as a hair tonic. I would surely purchase some to have such hyperactive follicles.

I think this evening's coiffure might be my favorite. Either this one, or the one from their recent Tractor show {in which it was longer and more rugged looking on the sides}.

I really think if we gush any more about the Long Winters, we're going to have to change our URL to www.longwinterssuperfans.com.

You know who else has a fresh do? Mr. Ben Gibbard. Even though I doubt he uses anything more than your average Suave shampoo product, I bet if Gene Juarez had a signature indie-rock hairstyle, folks be in line for the "Ben Gibbard". Me and my Roderick'd follicles included.

How exciting! This was the first time Death Cab for Cutie had performed any of the songs from their new album Transatlanticism.

It was like we were the beta test audience.

Dana, you really need to rip yourself away from your laptop once in a great while. I'm starting to worry about you.

Or as in Mo' Beta? That is one of my favorite Od-{Chris}-Walla flavors. Mmmmm, Antioxidants.

I have a confession to make. I've never seen Death Cab live before.

I know, I know. I've tried to get tickets numerous times, but they're always sold out.

Probably because it's DEATH CAB FOR CUTIE! Silly Char. So, what did you think?

Ben Gibbard was so humble and down to earth. His humility made him so endearing. I wanted to run up on stage and hug him.

It was great to hear the new songs live. The album version of all of the Transatlanticism songs are flawless. There is not a wince or regret to be heard. Again, he was able to comfort and commiserrate while offering insight and inspiration.

In particular, "The Sound of Settling" sounded great live…the way it takes the Smiths' formula of happy tunes with lyrics of desperation is perfect. How can you feel sad when Ben G. sings "ba BA, ba BA" with such giddy happy-go-lucky naïveté… but how can you feel happy when singing along to the verses "I'll sit and wonder of every love that could've been, if I'd only thought of something charming to say." A night of the conundrum indeed.

Oh, and and when the DCFCers broke into "The New Year," we were all stunned. I looked to embracey, who was standing to my left, and his jaw dropped. Afterwards, I asked him what he thought of the show… and he said, "I love that song!". I requested further detail on which song and he said, "You know, THAT song!"

Ahh… the power of those opening chords… the refrain of, "There'd be no distance that could hold us back!"

Can I start a petition for this song to replace "Auld Lang Syne"? Please?

I was happy to hear songs off of their previous releases too. Although they didn't play my all time favorite "We laugh indoors" {or as I like to call it, the Geneviere song}.

I love that song Geneviere,

I love that song Geneviere,

Does that mean that you all are in on "The New Year" as the new "Auld Lang Syne" campaign?