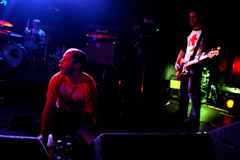 (Note to reader: the original draft of this review read simply, "Mogwai kicked so much fucking ass I'm still wetting my pants." However, in the interest of giving something back to the community, I have composed this expanded version, replete with second-rate thoughts that can't even begin to compare to the unique sensation of soiling oneself in pure, unadulterated bliss.)

There was a time when a review of a Mogwai show would sound like a broken record: "They started out with a song that was real quiet and then it got real loud. The second song was quiet with patches of loud. Then they played a real loud song that all of a sudden got quiet." And while there was nothing wrong with Mogwai doing that (considering that their version of instrumental rock & roll madness provided the foundation for most of the post-rock splayed on the edges of the current indie scene), there certainly comes a point in every artist's career when something has got to give.

And give generously they have. Hearkening eerily back to the early days of the band, when they used to expand their set by playing two different versions of each song, one soft and one loud, Mogwai have come full circle to prove that volume does not equal intensity. "Rock Action" and "Happy Music for Happy People," the band's two most recent offerings, have brought to light a kinder, gentler Mogwai, one that revels in the deep satisfaction of lush soundscapes more than the quick fix of sonic explosion. Live, this maturation is at times more shocking than the sudden wall of noise in the older material.

It's comforting to see Mogwai now that they are in that stage of their career that they can draw from an extensive catalogue of the now-wildly-diverse offerings that defy all critical attempts at slapping a label on the band. Early in the set, progressive but tempered numbers like "Hunted by a Freak" and "I Know You Are But What Am I?" built, constructed with layer upon layer of distinct sound templates, a tension that was not fully released until the distortion pedals were kicked, the lighting went all red, and "Mogwai Fear Satan" closed out the night, finally washing over the entire crowd with the Legendary Wall of Noise that is reputedly the loudest in the world (that was when I wet my pants).

After the show, my friend Adam was overheard saying, "That set was just ridiculous. It's just unfair to anyone who wasn't here." I think that about sums it up.