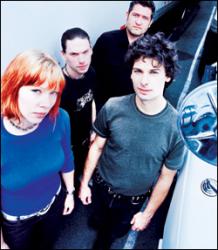 The spotlights were reflecting off all of the studded belts at Graceland on this particular Friday night. XXXAudio had friends and fans {and an imaginary girl} waiting outside in the rain for the doors to open. Shivering and wet, I entered, hoping that some good old fashioned rock and roll would warm me to the core. Ask and you shall receive.

At the forefront of XXXAudio is Denise Maupin and Brian Burnside. They teamed up with guitars and microphones to show their indie rock audience why power chords are called POWER chords. I don't think dust ever accumulates on any of Brian's fret boards. He was up and down that mutha like he was trying to start a fire. It was interesting to see a band with a male and a female vocalist that don't incorporate harmonies. The vocals weren't sweet at all: they were raw, hardcore and delectably fierce. XXXAudio had flavors of all the classic thrash rock {sans the big hair and makeup}.

During the set, the audience was participating in some sort of strange synchronized head banging. Just as I was writing that down {yes, we take notes during shows} ibLuc, who was with me for the evening, stated, "The crowd looks like they may be getting ready for a lunge pattern at aerobics class." The abrupt endings to each song left the audience head banging to sudden silence. When the head bangers gave their necks a short break, they raised their beers and screamed their wordless tributes to all that is XXXAudio. The fans were almost as interesting as the band. Or so I thought.

I was mesmerized by the bass player {Dan Infecto} who was identical to this amazing metal drummer guy I used to work with. I can't remember his real name, but everyone {even his mother} called him Slayer {for obvious reasons}. Dan incorporated a nice bass solo in one of their songs. Why don't more songs have bass solos? Bass players are musicians too.

Here’s where it gets interesting. For their second to last song they brought out Slice. "What is Slice?" you ask? The proper question for you to ask is who is Slice. Slice is XXXAudio's previous bass player that played on the album {Like Pumping Gas on Fire} they released in 2003. The strange thing is that when Slice came on the stage, everyone else left. It was an endearing singer/songwriter spotlight except it was with a bass guitar and it wasn't really endearing. It was stripped down Primus-esque rock with a vocalist that was borderline yodeling. It was strange, I'm not going to lie to you. There was even a point in the song where Slice started yelling, "YipeeKyeOhhhhhh!" The crowd loved it. When Slice had finished, the regular band came back on stage to sing the most ballady song of the set.

XXXAudio was consistent metal for the first couple of songs until the crowd started to get comfortable. Then they brought out Slice like a wildcard. Then they came back out and played a pretty song. One word to describe XXXAudio: unpredictable.