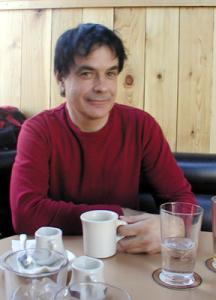 David Gedge of The Wedding Present and Cinerama

On a recent afternoon, I had the opportunity to lunch at the Elysian Brewery with Mr. David Gedge. As the frontman of Cinerama (and formerly of the Wedding Present), David has not only acquired credit for writing a large stash of indie rock’s finest compositions, but a sharp wit and charming humility.

He likes malt vinegar on his fries and…

And do you have a favorite coffee place?
No, because I’m not really a lover of proper coffee to be honest, I think it’s too bitter. In America I like diner coffee… you know, the stuff that tastes like coloured hot water… but here in Seattle even that is too strong for me! I usually ask for half water, half coffee, actually. I’m a bit of a wuss. I like the diner mugs, though…

You’ve got a mailing address in Seattle now, does that mean that you consider Seattle “home,” or are you here temporarily?
Erm, I am not sure really. This year I’ve been backwards and forwards. I came here in February and then we toured. Then we had to go back to do some British concerts. Then I came back to Seattle to do some recording. Then we went to Europe for another tour, including gigs in Dublin and Istanbul. And now we are about to head over there again. Wherever I, erm, lay my hat… that’s my home!

Is there anything you miss about the UK?
Oh yeah! Loads of things.

I miss cultural things… well, the pop culture, specifically, I suppose. I’m so glad that you can get the BBC on the internet. I’d really miss that.

When I go back now, I read all these things about people and I don’t have a clue who they are. Like a song could have been #1 for four weeks and I have never heard the record. Whereas if you live there, you’ll hear it anyway… because it is on the radio.

And “Top of the Pops” – I mean, it’s not a great program, by any stretch of the imagination – but I really miss it! The last time I was there I was like, “Great, I’ll watch Top Of The Pops!” But then when I put it on I realized “Err… what was I talking about? This is rubbish!” There was one band on there that I wanted to see and the rest of it was terrible. But I think it’s the fact that you can’t watch it if you want to, that makes you think you’re missing something.

It’s swings and roundabouts, though. You know… when I am over there I miss things about America.

Really?
Yeah… I miss KEXP a lot – that’s a great radio station. It is like having John Peel on all day.

The food is nicer over here in America. And wine. You can get a really nice bottle of Californian wine for three dollars. You couldn’t do that in Britain.

So it’s, you know, a trade off. I don’t know where I prefer, really.

You spend a lot of time on the road with your fellow Cinerama band members. Does each band member have a specific road tripping talent?

Simon drives all the time. He really enjoys it and it’s physically quite difficult to wrench him out of the driver’s seat. He will actually get up in the morning from the hotel and he will be outside sat there waiting for everyone else. And then he will drive all day. And he won’t stop.

As far as a navigator… that would be me, I suppose.

Except for navigation to restaurants, that is always Kari, our drummer. I don’t know how he does it. He has a nose for it and he is never wrong. If we choose a place without him, it is bound to be dire. It’ll be like salads for breakfast or something.

He will be like… “Let’s go to that place over there” and we’ll be thinking, “Hmmm… that doesn’t look very promising.” Then we’ll walk through the door and it’ll be the restaurant of your dreams… the owner will come over and personally greet you and say: “Oh, hello… come in… sit down… you’re just in time for my special prize-winning pasta, and, coincidentally, it’s half price for Europeans today.”

He hits the nail right on the head every time. It is his only skill really… oh, apart from playing drums, I suppose. And pulling girls.

Who DJs on the road?
Well, the rule is that “the driver chooses”. And because that’s usually Simon, we get a lot of his music. Which is… ok, really… it isn’t terrible. But he doesn’t really like pop. So we get a lot of The Rachel’s and weird stuff.

We’ve gotten a bit more democratic these days, though. Actually, that’s the downside of Kari. He brings some terrible music. He’s from Finland, so he’ll play Finnish Rock. Lots of screaming and guitar solos. Terry‘s role. She’s the calming influence. She pours the oil on troubled water. Is that the right phrase?!

Is she good at packing the van?
Oh god, no! (laughs). She is definitely not good at packing. Just the opposite, in fact… if it was left to her we’d be driving away with guitars left on the roadside. She’s always leaving possessions at hotels. But she’s really witty and she’s also the official tour diary keeper. The last one was just published in Orange Slices… and it’s really entertaining. Although I don’t come over too well in it, to be honest. (laugh)

On the last few Cinerama tours you’ve added some Wedding Present songs. Are there any of those songs that you are tired of playing?
“Kennedy”! I think it’s just a really sub standard song! (laughs all around). Even when we wrote it I thought it was definitely going to be a b-side… but the rest of the band disagreed. I’ve never been happy with it.

Inevitably, it has gone on to become The Wedding Present’s best known single. And I suppose that was the reason why Cinerama started doing it. I quite enjoyed it at first because I hadn’t played it since 1995 or something. And I suppose it is quite exciting live… but I’ve become bored of it again fairly quickly. So I will probably bury it again for a year or so.

Speaking of singles… you’ve got a new one, “Don’t Touch That Dial“. Does that mean that you’re workin
g on a full length album?
We are still writing and are about halfway towards it at the moment. I don’t think we will be releasing it until next summer, to be honest. I am going back to Britain in about two weeks to record a new Peel session and we are going to try out three of the new songs on that.

There is a lot of interaction between you and Mr. Peel. Is it true that you are the heir apparent to the John Peel throne when he retires? Didn’t I read that somewhere?
Well, I’ve never seen it, but I’m glad that you’ve read it… because that’d be great! I suppose I have been linked with the program for a long time; I’ve always been a massive fan of his.

And he has always been a massive fan of yours…
Yeah, well… (laughs humbly). There has been a relationship of sorts… and we do share almost exactly the same taste in music. So… yeah, I would be the perfect choice! But he’s never going to retire. He’ll be doing it for another thirty years!

Yea, and beyond that he can digitally record shows ahead of time to last us the next four hundred years…
It wouldn’t be very current though, would it?

I don’t know, everything seems to come back around eventually.
That’s true.

Your influences… American or otherwise… what were they when you first started out as a musician?
Well, I have always been a big fan of radio, so I was most influenced by whatever the DJ was playing. So… I suppose when I was a kid… erm, general pop music, my parents’ Beatles records… then Mud and The Sweet. I was just starting to “progress” into listening to Genesis and Yes when Punk came along to save me!

American punk or British punk?
At that time, mainly British. But it also opened me up to American bands like Television, I guess, and then later, Sonic Youth. After that I discovered The Velvet Underground.

I have always considered that your American counterpart would be someone like a Lou Reed or a Thurston Moore.
I’ve always thought Lou Reed is a really excellent lyricist, actually. He is similar to me in a way in that he has a very direct style… it’s not particularly poetic or metaphorical… it is just kind of conversational. That hugely influenced me. But, I hate that question of influence because at the same time that I was listening to the Velvets, I was listening to John Barry and soundtrack stuff. I guess that is what everybody says, though!

What is the first band that you ever got obsessed with… where you had to collect all of the b-sides and rarities?
Well, no one really. The only band that I have every record of is Altered Images. I don’t know why, really (laughs). I just thought that they were brilliant! And I still think they are the greatest pop group ever, but I suppose I got into that mentality where I had a few records, so I thought I had better get the complete set.

I am a big fan of the single, as a format, actually. I think the answer to the question “is there one band that I have always followed” is that I am more a fan of having a load of things by different people. Compilations are usually my favourite records. I think that probably comes from a love of radio as well.

Is there a band that you are really in love with now?
Broadcast… I think they are exceptional. I just saw them over at Chop Suey the other night. I have been refreshed by that… Them and Stereolab, all those kinds of bands. My Bloody Valentine…

Have you had a chance hear the new Kevin Shields tracks on the “Lost in Translation” soundtrack? They are awesome.
No, I haven’t heard that.I wish he would flippin’ put out a My Bloody Valentine record, though. He is fannying around being in Primal Scream. And they’re just terrible! Really, really crap.

And then NME keeps sending out newsflashes saying something like “NEWSFLASH: Kevin Shields mentions My Bloody Valentine” and we all get our hopes up.
That was a great band. It is such a waste of talent!

Well, and the obvious end question, what are your top 10 favorite albums of the year so far?
Well, I haven’t had a chance to put together the list… but, I really like the new Strokes album… and the Broadcast album… obviously. That’s really good.