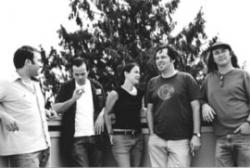 Like any good alt-country band, An American Starlet reminds me of romance and never fails to get a tear in my beer. I've seen AAS before, and their melancholic twang amazed me even while I was in a giddy, social, love-is-grand type of mood. On this particular night, love seemed not-so-grand for me, and even though they were playing the same notes and singing the same lyrics, I saw an entirely different AAS. They took the stage and took part of my heart with them.

I can't think of a more ideal band for a heartache. The stage chemistry between the two vocalists Ian Parks and Liz Green inter-twined to form the most heartbreaking, stomach-wrenching set I have seen in months. The passion and pain were blaringly obvious in both Liz's vocals and in Ian's facial expressions and in the lyrics.

I would have started tearing up if it wasn't for the drunken jester in the front row, tripping over imaginary kinks in the imaginary carpet on the floor. As drunks sense moments of vulnerability, he of course chose me out of the crowd to talk to. After a too close for comfort slurred one-way conversation, I finally answered the only question I could translate, "Whassyer name anyways?" I told him my name was Suzie. Then I ran away.

But I couldn't run far enough. Liz had a minor altercation with the Drunken Jester {DJ} too. While facing the crowd front and center during their set, he tripped on nothing and fell back into the stage monitor which, in turn, pushed onto Liz. Liz was a champ and started smiling, glancing at her friends in the audience with a, "What the hell is up with this guy" look. By this time, DJ had successfully pulled all eyes off of the stage and onto him. He chose this as the opportune time to talk to — guess who? — me {well, Suzie}. He pointed, said quite loudly "SUUUUUU-ZEEEE" and stumbled over to chat. Let me tell you, it's hard to be imaginary when everyone in the bar is looking at you. you cheapskate}, and tell me that's not the most heart-wrenching song you've ever heard. Actually, if you know of a more heart wrenching song, don't tell me about it. I don't think I'll be able to handle it.

I really hate to distract from my lushing about An American Starlet, because they deserve all of the lushing I have to give {lushing = gushing + lusting}. All I wanted to do was absorb every harmony I could squeeze out of Liz and Ian. Luckily, I have their latest CD The Duchess of Hazard and I listened to it five times in succession the next day.

I'm even more in love with them now. I just wish they would play out more! Next time you feel your heart shattering inside of your chest, go to an American Starlet show and let Ian put your pain onto the stage and tell you how to numb it with whiskey. Don't believe me? Listen to the ultra-freaking-awesome {sorry, I'm at a loss for appropriate adjectives} song, Half a Heart or "Maker's Lament" {which isn't on the website; sorry, buy the album here.