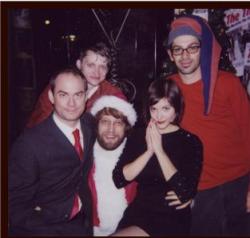 Love Hotel, and An American Starlet

I have to say that every time I see Sarah {which, granted, isn't a lot} she has on a different feisty black dress. The boys {if I may go off on a superficial tangent for a small while} were all dressed in Love Hotel uniforms: button down lasagna noodle* shirts tucked into black pants. I think it was their attire in conjunction with their sound which lead me to surmise: Love Hotel sounds like the Yeah, Yeah, Yeah's if they were to be reincarnated as a lounge act. I want a martini. A martini and some lasagna…

*If you're keen, you may have noticed how food often enters my reviews. Describing clothing is no exception. The lasagna noodle shirt is one of those fancy shirts with ruffles down the chest that look like lasagna noodles.

Sarah bends over when she sings almost as if she's scolding a small child. Perhaps she was scolding the people in the front row, which is quite possible because the drunkest man I've ever seen {who continued to get drunker – see below} was front and center all night. I think the scolding made him thirstier. I'm glad I stood off to the side.

Mark's backing vocals were magical. I describe them as magical because they seemed to appear out of nowhere. Every time he sang, I thought, "Where is that coming from? Is it the guy standing next to me in the audience?… oh wait, it's the drummer." He's some kind of voice throwing master. You'd think I would have learned by the third or fourth time, but I didn't. It's because he kept switching where he threw his voice. He's tricky, ladies, watch out for this one. I also think it was because he was buried in his monstrous drum kit. He must be very decisive because if you were to put that many options in front of me, I'd be freaking out going "I don't know which one I want to hit". It's the Libra in me. The phantom vocals from Mark blended with Sarah's voice so deliciously like ricotta and parsley {ok, that's the last one…I swear}.

Bo's bass guitar {Bo is the optimal name for a bass player. "Over here, we have Bo on the bass."} was the color of fresh farm dyed salmon. Crayola couldn't have come up with a more perfect color. I want to paint my car that color.

Aaron was very earnest in his guitar playing. He was like the shy boy down the street who's an amazing musician but still refuses to look anyone in the eye when he's playing. He also had a beer on stage and another on reserve…my kind of guitar player!

My favorite part of the whole set was their scrumptious four part harmonies on one of their closing songs. It was angelic, pristine, lovely beyond words and seemed effortless although I'm sure it required hours upon hours of practice. It was better than mom's fresh baked bread. {if you're reading this, sorry mom}

Love Hotel utilizes pop sensibilities softened by a female lead vocalist and a drummer that multitasks more than a CPA on April 19 {thanks Jenn}. Their ex-bands and creative side projects attest to the fact that these cool cats aren't messing around, they've got the rockstar credentials, they just need some more fans… like you! Get your fanny to a Love Hotel show.

After Love Hotel, An American Starlet took the stage. I can't think of a more ideal band for me to have seen that night. The songwriting and melodies were perfect. They twined together to form the most heartbreaking, stomach-wrenching set I have seen in months. The passion and pain were blaringly obvious in Liz's vocals, in Ian's facial expressions and in the lyrics. I would have started tearing up if it wasn't for the drunken jester in the front row tripping over imaginary kinks in the imaginary carpet on the floor. Of course, he chose me out of the crowd to talk to. After a too close for comfort slurred one-way conversation, I finally answered the only question I could translate "Whassyer name anyways?" and excused myself to the bathroom. Of course, I told him my name was Suzie.

Liz {AAS singer} had a minor altercation with the Drunken Jester {DJ} too. While facing the crowd front and center during their set, he tripped on nothing and fell back into the stage monitor which, in turn, pushed onto Liz. Liz was a champ and started smiling and glared at her friends in the audience with that What the hell is up with this guy look. By this time, DJ had successfully pulled all eyes off of the stage and onto him. He chose this as the opportune time to talk to his friend Suzie who kept making a long grocery list during the show {I was actually taking notes}. He pointed, said quite loudly "SUUUUUU-ZEEEE" and stumbled over to chat. Let me tell you, it's hard to be imaginary when everyone is looking at you. I could read their minds and they all said "Suzy, get your drunk friend out of here."

I really hate to distract from my lushing about An American Starlet, because they deserve all of the lushing I have to give, but I *was* distracted by DJ and all I wanted to do was absorb every harmony I could squeeze out of Liz and Ian. Luckily, I have their CD and I listened to it five times through in succession the next day.

I've seen An American Starlet before, but I was always in a giddy, social, love-is-grand type mood. They amazed me the first time I saw them even though I wasn't thoroughly prepped to hear melancholy twang. This show, even though they were playing the same notes and singing the same lyrics, I saw an entirely different AAS. I'm even more in love with them. I just wish they would play out more! Next time you can feel your heart shattering inside of your chest, go to an American Starlet show and let Ian put your pain onto the stage and tell you how to numb it with whiskey. Don't believe me? Listen to the ultra-freaking-awesome sorry, I'm at a loss for appropriate adjectives} song, Half a Heart or Wasted (find out real name of song) {which isn't on the website, sorry, buy the album here you cheapskate}, and tell me that's not the most heart-wrenching song you've ever heard. If you know of a more heart wrenching song, don't tell me about it. I don't think I'll be able to handle it.