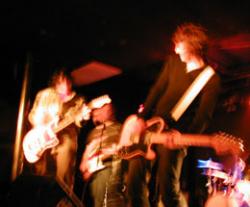 It's about time for the first great Christmas song I've heard released since the early 80's! {Think Bandaid's "Do They Know it's Christmas" and The Waitresses "Christmas Wrapping… with the 1985 "Last Christmas" by George Michael almost-but-not-quite qualifying}. And now… "Presents wrapped like secrets that I don't wanna know. Kissless and forsaken under mocking mistletoe…" The Capillaries opened their set with this holiday ditty, "Don't Leave Me 'Til After Christmas, Please." The ode was oddly incongruous, with its bittersweet hoping-for-best-yet-bracing-for-worst lyrics set atop the cheerist blast of rocking indie-pop I've had in my stocking this post-season. Yow! Looks like I've got my first musical crush of the new year. That didn't take long. Pitter patter.

I am amazingly surprised. Whilst researching them prior to the show, I immersed myself in their site (bravo on the exemplary theme execution, fellows!) and I've got to say that their mp3s didn't do them justice.

And while the music was great, it was really the stage banner, the lighthearted whimsy with which they played,that made the night so damn fun. So be prepared for anecodotes and stage banter. And fer Chrissakes, go see them yourself. They're a riot, even if you're only drinking soda water (again, $3 for 2 soda waters, insert appropriate indignation here.)

They were catchy! They were infectious good fun!! And damnit, they were nice.

I felt like I wasn't in Seattle because every man I've met that night was really nice. And appreciative. And almost flirty.

Which is not to say that their music was just happy-go-lucky. There was a richly sinister underbelly in those guitars, a depth of darkness to edge the pop sensibilities.

I heard many influences… from Elvis (C, not P), to Jellyfish, to the Amateur Lovers (but who remembers them but me?), to The Posies, down a couple of octaves {but then I think all two-boy-vocaled bands are Posies-esque}. I just loved those dueling manly harmonies.

But I think that they have a bit more of a gut punch than those folks (Jellyfish or the Posies). Punch being warmth and approachable. Their formula is comfort + mathmatics in that at no point did I feel uncomfortable. I was at one with each song. I especially loved one called "Sleeping You Off." It's a great concept, and I am definately adding it to my next break-up/heartbreak mixtape.

Not even a feisty, recently-acquired guitar slowed Matt down.

"I was all excited because I got a great deal on this guitar and now I am discovering why," he joked. They kept these sort of making wise-cracks about their playing prowess. My favorite:

{Matt} "Looks like that decision not to practice last night is really paying off."
{Jon} "Do you ever have that dream where you're in school and have to take a test and you haven't studied? Well we knew there was a test."
{Matt} "In those dreams I'm always naked. And I'm kissing my brother. And that dude kisses good."

Well, their web site does talk of their kissing prowess…

You all know about how Mike "Mikey" Davis, the guitarist for the Capillaries, was the guitarist in Ripley the last time we reviewed them? Tis true. He told us he also used to play for local dark-rockers Cober. A self-professed guitar "slut" (his word, not ours)… He still has that disarming charm and guitar skill for which we loved him then. I'd totally buy a guitar from him.

Mike would make a great Velvet Goldmine. He looks more Strokes-like than The Strokes. Someone should dress that boy in fur and eyeliner.

As I wrote in my Dave Davies review last year, I hate being told what to do by those on stage. Yet when they encouraged everyone to move closer, we did. In this case though, getting closer was like hanging out with old friends. The night was so wonderfully strange. Is this what life is like in Oklahoma… or Ohio? Were they in rare form… or are they always this goofy?

Yeah, it was a serious party atmosphere by any standards, let alone a Tuesday night. And the evening ended with cover songs. Silly, funny cover songs, during which they kicked, switched, punched, and dropped their guitars. Sigh.

{Matt} "We're gonna play a Posies song!"
{heckler} "Those guys suck!"
"Yeah, fuck the Posies!" they said, launching instead into my favorite Cars song, "Just What I Needed."

They confused the versus but eventually got to all the lyrics… THEN they launced into The Posies, "Burn and Shine." And you know, it was good… but it was better when they just played The Capillaries… The next time I throw a kegger, I'm asking The Capillaries to play and you're all invited.