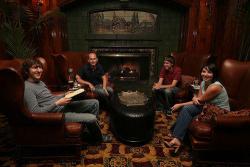 Heather Duby, with The Lights

One of the best things about going to Graceland for a show is seeing 'the drummer boy' who works the front door. He is the one who takes your money and stamps your wrist. You also see him drawing when things get slow, but of late, he seems to have quit drawing and taken up the 'air drums'. I like this guy and he adds to Graceland's… ambiance, if you will. He was working the night we went to see Heather Duby and I showed up early because it was the first show of the new year and I had been itching to get out after all that time back in my ugly homeland.

Graceland was about 40% full when the first band, The Lights, went on. They were fine for an opening band but they kind of split the ticket for me… I found myself liking the music but the content of the lyrics, as well as the singer's voice, was rather empty and tiresome. I left and went back to the drummer boy's room. There I had a second drink while wondering if the attractive and reserved woman bartender ever smiles while working at the Graceland. Probably not. I probably wouldn't either.

Now sometimes Graceland plays good music in that first room and sometimes they play bad music. Tonight there seemed to be a contest of wills going on between the bar staff (who wanted to play Clinic) and the drummer boy, who wanted to play something truly atrocious (but, I suspect, worthy of banging out the beats). While contemplating the bar staff, the drummer boy, and whether Heather Duby plays Ms. Pac Man before a performance so that she doesn't get nervous, I headed back to the stage room.

The second band was really really bad. I'm sorry. It's true. It was one of those performances where half way through the first song you decide to head back into the other room but in that room we found that the drummer boy had won out and his music was being pumped into the room. This put us in the bizarre pinball situation of bouncing back and forth between the rooms trying desperately to find a safe haven where I wasn't violated by the really hideous music. Meanwhile, all the time, hoping that Heather Duby would get off Ms. Pac Man so that a) I could take my mind off the bad music and b) this would be a sign that the second band would have to break down their stuff. Yes, it's good to be back in Seattle.

Finally, they stopped playing or the bar staff put Clinic back on and we were able to weather through the storm until Heather Duby began. I was not a fan of Heather Duby's older stuff but I have totally come around to the new material. I believe this is the third time I've heard it and it's very good. Not to mention that Heather is a great performer, partly because she is so confident on stage. Unfortunately, I don't know the names of the songs she was playing and she didn't mention when that next album would be coming out (Although she did say that she really likes playing at Graceland because of the Ms. Pac Man. What is it about women and Ms. Pac Man?).

Regardless, the new material has a bit of a melancholy feel to it which works well for me and compliments her voice nicely. In the end, Heather Duby made up for the earlier acts and I hope everyone goes to see her next show. I would be interested to know where the inspiration came from for all the new melancholy material…