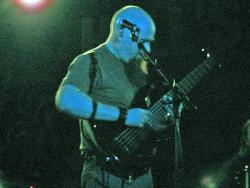 Four bands were on the bill for our Sunday night at Graceland adventure but sadly, we only made it in time to see the last two. We had never heard of opener (the third of the four bands on the bill) Jodi Hates the World, and were excited for the musical evening ahead. But not excited enough to overlook the fact that it cost us $3 for two soda waters. Grrr.

A sober person's travesty, for sure. Before we could contemplate the $3 tab too much, Jodie Hates The World took the stage. My first thought is that they kind of sound like Yeek Yak Airforce with an extra guitar.

Yeah, I could see that. They're like YYAF, minus the Modest Mouse. They made me feel a little grunge nostalgia. They sound like a mature, developed… more natural progression… kinda like Soundgarden, but in the present. But unlike some other bands we've heard, who sound like they just never stopped listening to Bleach.

Is this the garage rock sound of 2003? We are all familiar with the current/traditional definition of "Garage Rock" in the music dictionay. Their sound has the emo-rific lyrical style, driven by guitar pedal antics and a stern rhythm section… like a 'Future Sound of Garage Rock.' They even carry themselves on-stage like they are playing from their friends' parent's carport. They weren't there to impress with stage antics, coy banter or cool indie t-shirts.

Maybe it was the earplugs, but all I heard was is solid rhythm. They're really tight. The driving rhythm nearly made the vocals incidental.

Yes, a fine way to start off our musical evening. As the set ended, we made our way to the bar area in seach of a seat… or a friend to latch onto who had a seat…