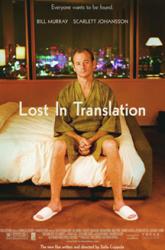 I'm a lil' bit late with my top-10 list, so I'll spare you a long-winded prelim summation of the cinematic year. How about an introductory haiku instead?

2003: The year that was
Sofie, Bill, Scarlett,
Y'all made me so happy I
Saw your movie thrice!

2. ELEPHANT
Much of Gus Van Sant's film consists of lengthy, gorgeous tracking shots, languid and serene; the final, horrifying moments are unspeakably intense. And the ghost of Columbine lingers, an unmentionable elephant present in every single frame. full review

3. LE FILS (THE SON)
Belgian brothers Luc and Jean-Pierre Dardenne's ultra-compelling Christian allegory is complete, insightful, and disturbingly confrontational. Olivier Gourmet is a revelation as a desolate carpenter who develops a sudden fascination for his young apprentice (Morgan Marinne). We learn early on the reason for Olivier's obsession, and we are baffled; the teen doesn't find out until the end, and we are electrified. more info

4. BIG FISH
I'm utterly amazed at Tim Burton's sublime juggling act of two movies going on simultaneously. By the time we reach the satisfying (but not quite expected) conclusion, Big Fish has become both a moving multi-generational saga and a fascinating piece of oddball Americana. full review

7. SPELLBOUND | ÊTRE ET AVOIR (TO BE AND TO HAVE) (tie)
Surprisingly gripping Spellbound offers a unique glimpse at the diverse lives of eight finalists for the 1999 National Spelling Bee, then follows the kids and their families to the big D.C. competition. The far more unassuming (and far less eventful) To Be and to Have sublimely chronicles a year of classes for a rural French schoolteacher and his students. These two enchanting films about childhood were the best of 2003's fertile nonfiction crop. Spellbound official site | Être more info

8. MORVERN CALLAR
Fabulous Samantha Morton's unparalleled performance in the titular role brings home this mesmerizing and unsettling study of the inexplicability of grief. Don't expect a traditional linear narrative, or a movie tied to its script — director Lynne Ramsay trusts us enough to offer a brave portrait of a private reality. full review

10. L'HOMME DU TRAIN (THE MAN ON THE TRAIN) | MIES VAILLA MENNEISYYTTÄ (THE MAN WITHOUT A PAST) (tie)
Two wonderful films by renowned European filmmakers (with English titles that begin with "The Man"), each exploring culture-driven notions of identity: an orderly teacher and a ne'er-do-well gangster cross paths and contemplate switching lives in Patrice Leconte's The Man on the Train; a Helsinki amnesiac drolly begins a new existence on the fringes of the city in Aki Kaurismäki's The Man Without a Past. Glorious, both. Man on Train official site | Man w/o Past full review