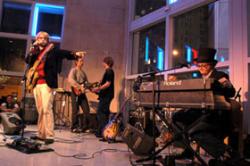 Oh God, how I adore The Long Winters. With this, our… I believe… fifth review of this spectacularly gorgeous band, I believe I can safely say I have crossed the line from super-fan to potential stalker. But have no fear: my adoration has only benevolent intent. No rabbits boiling on stoves or anything scary like that.

I was just elated to be able to hear them play live after a many-month hiatus (during which time they've been recording their second album with the likes of Ken Stringfellow and Death Cab for Cutie's Chris Walla). We got to hear a smattering of new songs as well as some creative versions of my old (well, old in a last year kinda-way) favorites.

So without further ado, a set list, with imaginary observations and exclamations, as appropriate…

Song 1: Ahh, "Scent of Lime" — a favorite. (Please forgive me if you hear me exclaim that again later on in the show… because… well… we can be classified as afficionados.)

Yeah, this song makes me feel almost nostalgic now. It's so burned on my brain from last summer. I recall writing two heartbreak emails to this album, the same night even. I called the first one, "It never rains enough to cool my fever." It's another gorgeous Roderick metaphor. But I digress.

Song 2: This is a new song… so I am unsure of the exact title. I am guessing either "Nobody's Chasing Us" or "Sound of Coming Down." That is the problem with seeing a band so many times — because when you start to get familiar with the unreleased stuff, you have to start naming the songs yourself.

Song 3: This was another unreleased song, due out on the new album. I'm guessing it will be called "Shapes."

Yes, I remember hearing this song the last time I saw them, and commenting then on how much I liked it. Another amazing musical metaphor: "I'm waiting for you to throw… more than Shapes." Beautiful. Next?

The sound this evening was more acoustic, romantic and sultry than in previous incarnations. This intimacy was even more remarkable with the background of the bustling city downtown visible outside the glass walls.

Song 5: "Car Parts" John told us, "We might play this song twice — once an old way and one now." Right on! This version rocked — in fact, it nearly RAWKED. Wow.

Song 6: "Medicine Cabinet Pirate." John introduced it with, "We need to remember how to play it." Hehe. They chirped away on the keyboard for a couple moments to find the proper key.

Meanwhile, Long Winter Sean Nelson entertained the crowd by asking if the museum wraps up the art for other "After Hours" bands. Strangely enough, they don't. The word of the infamous Long Winters Taggers obviously made it to the Seattle Art Museum officials. Perhaps they should have checked us all at the door for spraypaint…?

Song 7: a new song. I have no idea what the name of it was… other than the band warned us before starting that they had never played the song live before. And it was… um, evident. Guitar-crackly feedback, faltering and out of sync timing… Whoops. After they finished, John offered, "I wish we had the excuse we were drunk."

Song 8: A song named "Stupid," which will appear on the upcoming second CD. I love the "Throwing Shapes" song — but that "Stupid" song is awesome. Then they took a short break…

…during which time we learned from Eric Corson (bassist) that their new CD would be out April 22nd. Rejoice!

When they came back, it was first just John and his guitar and he gave us … Song 9: With this one, at least five audience members grabbed for the wrapped up artwork to prevent from swooning and falling as he sang, "Is that your kisses I'm feeling…"

Then, John called Sean up to the front of the class, er… room for a couple songs duet-ie style.

Song 10: "I've been away and I've been out of my head" — I can just see this being an oft-used e-mail subject line amongst the Long Winter Taggers.

Song 11: "Car Parts," but pre-Long Winters, with just the two of them. It was really sparse and gorgeous, with Sean providing super-high harmonies.

It gave me goosebumps. The crowd LOVED it. By this time the remaining band members were called up in grade school fashion to rejoin the band and play a few more. Song 12: Cover of Simon and Garfunkel's "The Only Living Boy In New York."

Hmm… I think this is the first time I've ever seen them do a cover. I am not crazy about Simon and Garfunkel, but the idea of the Long Winters sifting through their record collections is exciting.

Song 14: "Copernicus," from The Worst You Can Do is Harm. Gorgeous too.

Song 15: "New Girl." I really like this song! This'll surely make it on my end of the year mixtape. "Be kind to the new girl."

Yeah, where'd all that energy come from, so late in the show? They just tore loose on that last one, and then ended the show with a super louder version (after considerable ongoing debate — fast "Mimi" or slow "Mimi?") of…

I think the woohoo's of those of us cheering for the fast version is what tipped the scales. Lesson to be learned: Always woohoo when you vote.

Then they promised, "We're gonna take a few months off and play our instruments…." {aside to audience} "What are you laughing at? …and when we come back, we're gonna SLAY!"