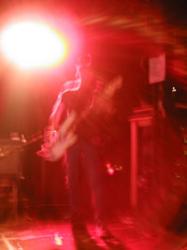 When I first heard the name Water Kill the Sun, I was perplexed — which partly accounted for the fact that I kept adding an "s" to different parts of the title when discussing it with others. Waters Kill The Sun, Water Kills The Sun, Water Kill The Suns. Let's not even talk about what I was doing with apostrophes. It wasn't until I saw them live (and spotted the inspiration for the name on the old I-Spy building) that I was able to properly remember the order and conjugation of words that make up this name as well as understand its relevance in their sound.

The four-piece upgrades the traditional Northwest indie-sound with, among other things, devo-esque keyboards and vocal leads that switch between fragile falsetto and alt-rock rasp. Personally, I find an unmistakable nod to Pablo Honey Radiohead… in the most intricate of ways.

I felt the same indie rock base but with space-rocky keyboard samples. Keyboard player Gavin is not only in charge of adding in the contrasting samples, but also adding in his fragile, child-like falsetto. The contrasting vocals meld against the rest of the song. Together they break into a gentle avalanche.

Visually, keyboard player Gavin's dance moves also contast with the rest of the band. They are fairly stationary, while he is not too cool for school to dance and flail about.

Yes… he uses his keyboard as a dance partner through the bulk of the show. I can't help but be reminded of that Friends episode when Ross finds his keyboard. I prefer when Gavin provides the background "ahhhs" and let's the main guy sing. His voice is far stronger and sophisticated.

And yes, I hear the early Radiohead comparison as well. They sound all liquidy in parts. I really like them overall.

I like the contrasting vocals. Their voices interfuse like that part in Adaptation when they are on the phone and they both hum at different tones and they create a phone's dial tone. Except instead of a dial tone, it is beautiful Thom Yorke tones.

Was he dancing with a glockenspiel?

Kinda… he was more swaying with it. Is that what that was? It was some freaky xylophone on a stick that he's striking with undue force. In hindsight, I found his stange antics a bit distracting from the gloriously full music.

I think it was great that he was so into the music. It upped my energy level and accented the otherwise mesmerizing guitar and rhythm section. They used rockstar dissonance in the same way Radiohead did on their first album. (Yes, again with the Pablo Honey reference).

One of the stranger requests we've heard at a show: "Does one of the other bands have a snare drum? We broke ours."

Geeesh! I mean — who breaks a drum? I guess that is substantiation that nothing is done half-assed with these guys. Even the songs are on the edge of epic (not Kinski epic, but longer than your average Pablo Honey song).

And they use dissonance not as a perpendicular but rather a parallel to the song. Water Kill The Sun, as complex as their name.