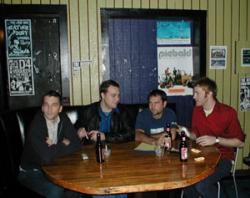 O yes, Graceland. It was our third time there in three days, and we were rarin' to go… because tonight we were going to see Mines. Look at these guys, looking so awkwardly cool for the camera, planning their west coast tour (for this February and March) and their next CD. All this, 10 minutes before showtime. They're sweet, and they're ambitious!

I halfway-heard Mines when they opened for Tullycraft a couple of months ago… but I had a good booth and even better company and drinks that night, so I wasn't really able to give them proper attention. I remember cute pop melodies, but not much else. So I likewise was ready for a good listen!

My initial impressions were positive. A modest crowd huddled in by the stage as they began playing melodies — lyrical storytelling, a bit stark instrumentally. Sweet and sincere, these songs continued a gentle plod to a quietly unremarkable finish. And they sounded… well, a lot like Death Cab for Cutie. I wanted them to let loose!

Yeah, upon first inspection, the obvious comparison here was undeniably Death Cab for Cutie. But even more remarkable was their Sebadoh-like switching of instruments! Throughout the course of the night, the four band members rotated instruments effortlessly. It was impressive, and a little confusing. I felt dizzy.

Yes, I do love a good musical Chinese Firedrill! These guys did it without ceremony; in their own quiet little way; they just unassumingly moved around the stage, sharing vocals, keyboards, drums, bass, and guitars. I asked band member Aaron Bolton how they choose which member plays which instrument for each song.

"Whoever gets in the chair first," he cleverly replied. "It all just works out." "Mostly Ron (Lewis) and Chad (Hanson) write the core parts of the songs, and then we deconstruct and reconstruct them, so that everyone works on songwriting," he continued. "Though sometimes we deconstruct it and just leave it there."

Yeah, when they can change instruments like that, it's a sure sign of multiple songwriters in the band. They are able to make it work to their advantage.

It's an interesting phenomenon, this rotating instrument tactic. It keeps the audience alert, that's for sure. And there's no denying these guys are all incredibly gifted musicians. But does the diverging musical abilities come at the expense of solidity of sound? Perhaps when there's so much diversity there lacks a certain cohesion… and despite the obvious song-writing and technical gifts here, I found myself awaiting a certain release that I never got — like these guys were teetering on something spectacular that just never went over the top.

I heard a range of influences. The vocals evolved to that of an indie-pop band on Spin Art in the early 90's. Comforting along the lines of the Spinanes. They even lit incense to accompany that intricate guitar playing. They have the sensibility of Unrest make-out-club guitar playing and hints of The Jam and Sunny Day Real Estate. At one point, one of those vocalists reminded me of an Ozzy ballad (!). And as for the aforementioned DCFC comparison… they've a less 1950's squeaky-clean sound. They've dirtied it up a bit, with more focus on guitar and non-vocal melodies. They've taken the pussy out of Death Cab.

Wow, Liz. You're Mclusky addiction is surely coloring your vocabulary…

Yeah, well, now at least when people search for "girls + pussy" on google, they will get our site!

And hey, they've got a strong indie-pop rhythm section. Was that a maraca? Nothing says "indie-pop" like a maraca.

I think I read that on NME.com.

These guys don't have that typical sound of those oh-so "The" bands. They're still poppy, but they sounded more elegant, sweet and serene. They definitely either grew on me, or their playing grew more aggressive (in a very good way) and confident as the show progressed. The last song was actually my favorite.

As our friend April (who was up from SF and attending the show with us) said, "They're cute and they sound good!" Nothing wrong with that.

These boys are fine song-writers and great musicians. They've many influences there, at times battling against each other — which enhanced the entertainment value for half of us, and left others confused… We're interested to see how they progress…