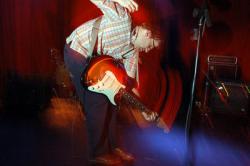 Aaron Semer of The Plains has been keeping us abreast of his band's live schedule since I briefly met him at the Six Parts Seven show back in August. Our packed schedules had been unable to align with their show schedules — until this night.

Yes, we've been reading great things in the local papers, and have been looking forward to seeing what "the man who taught John Darnielle to emote" sounds like.

And we did! The evening began with our favorite local artist, Randy Wood. We found him ensconced in the prize corner booth (with french fries) with room for two imaginary girls. Turns out, he Aaron went to college in the same town, back in the midwest. "I'm just here for the rockers from Ohio," said Randy. "You know, like Kim Deal."

When Plains band members were spotted leaving the bar area, we successfully put two and two together and headed into the show room… even broke the traditional half-moon barrier of emptiness that typifies the front portion of the crowd during half-filled Seattle shows.

Once the music started, we weren't the only ones — I'd say a good 20 of us were approaching NEAR the stage, with one guy off to stage right even flagrantly dancing. Dancing, at Graceland! On a Sunday!!

I LIKED these guys. They piqued my interest, and so I (along with the rest of the crowd) moved in…

Plus Aaron is a cutie. He's a cute indie-nerd. Can we coin that term? If we can, we have found it in Aaron Semer (and yes, it's a huge compliment).

So as I was saying… he's a cute indie-nerd with a really strong voice — and he's not afraid to project and articulate, so that his incredibly (don't say cute again) lyrics can be understood over the rockin' and rollin' music.

Throughout the evening, The Plains shifted musical genres effortlessly; they jangled and belted and Dick-Daled their way through their set. Not bad for a band with only one CD.

Yeah, we almost got to hear a cover song, but it was a false alarm. The crowd heckled, eager for more. Who doesn't love a good cover? "Someone just called us a rift-tease. We just played the opening chords to Judas Priest's 'Livin After Midnight'," said Aaron.

You know, we haven't said anything about the rest of the band.

Ahh, true. Well, they're all indie-rock nerds. The bass player was predictably stoic, the guitar player adorably spazzy (did I just write "spazzy?" help me, I just quit drinking coffee…). And I dug his t-shirt (which read simply, "A lot of art is boring.")

The best thing about indie-rock nerds is that they're courteous! I loved how Aaron asked the sound man how much time was left in the set. And then he thanked us all for being out so late on a work night. "I have to be at work at 7 in the morning, and I bet a lot of you do too," he said.

You're talking about Aaron again.

Ok, right… when THEY first came on stage, I kept trying to figure out where the John Darnielle (from the Mountain Goats) comparison came in. By the end, I got it. The earnest wails, the smart-alt-folk-hyphened-descriptive sound. And just like on the Mountain Goat's most recent album ("Tallahassee," a fine album that you should own) the quirky singer-songwriter was backed by a cohesive band.