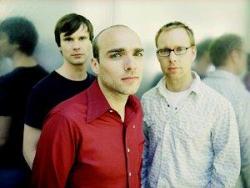 What an honor. For my inaugural imaginary review I've been given the distinguished task of reviewing The Fire Theft's first public performance. A little background information — The Fire Theft features Jeremy Enigk on guitar, Nate Mendel on bass and William Goldsmith on drums. Essentially, Sunny Day Real Estate renewed less guitar player Dan Hoerner. The Fire Theft was minus Nate for this show, who was away on tour with his other little project entitled, The Foo Fighters.

The line-up tonight featured Jeremy, Will, Nick Marci on bass, Billy Dolan on guitar and Brad Wood (producer of the first two Sunny Day albums and it seems theirs as well) on keyboards. My first observation of the audience was the gender ratio: Sunny Day had quite the single white guy following, with the guy to girl ratio at five to one (and the guy to single girl ratio at least ten to one).

Our only introduction to this band had come from their website. Over the past few months the site has graced us with two tracks, with the total of The Fire Theft's work appearing closer to the prog rock of the track "Sinatra" than the poppier, "It's Over." But we'll get to that soon enough. On to the show.

#1 — Uncle Mountain
Our introductory track opens with an ambient, dreamy-like feel ala spacey veterans Pink Floyd. It proceeds to break into a tribal-like rhythm before settling into a more typical rock groove. Jeremy offers up his beautiful, soaring voice for us all to become rapt in and damn if it isn't nice to hear in person again.

Those not blessed with earplugs can concur with this reaction. The song continues on in a more typical rock fashion than the works of Sunny Day. The first comparison that comes to mind is The Who. Lots of keys mixed in with the guitars and percussion. At the conclusion of the song Jeremy sadly proclaims that the guitar player blew his amp head before the song even got going. He goes on to say that the band never used to do guitar solos, "But we do now," (a veiled shot at the departed Mr. Hoerner?) and the one in that song was, "wrecked by technical difficulties, which is a shame." To which someone screams, "Play it again!" The bass player asks the audience, "Can we really play it again?" Do I really need to describe the answer? We are then offered up another serving of the song. This time with said guitar solo. Any difference wasn't obvious.

#2 — Oceans
A slower paced number featuring piano and organ against the layers of guitar. Reminiscent of "Abigail Anne" off of Jeremy's solo album, Return of the Frog Queen. Which is understandable as rumor has it that much of The Fire Theft's material originally gestated with the intention of appearing on Enigk's sophomore album (as a side note — he is still under contract with SubPop for two more solo albums).

#3 — Summertime
The catchiest of the songs not featured on the web site. Again comparisons to Jeremy's solo work are just.

At this point some adoring lasses shrieked out lustily for the drummer. Will comes back with the practical explanation, "I bet twenty dollars that was my sister." This gathers a laugh and leads us to…

#4 — Carry You, #5 Hands on You
Lots of keyboard swirls in, "Carry You," again bringing back the ELO-like seventies classic rock vibe. Neither song sounds to drastically different from the previous two.

#6 — It's Over
This is the one that had been posted on the website the longest. Thusly, it garners by far the biggest reception from the crowd who seem to recognize its sweet opening melody. The closest song to a Sunny Day tune at this point in the set. Jeremy's vocals are indecipherable as ever. Luckily the lyrics for this one have been floating about the internet for sometime. A sampling — "Where to fit in, never to roam and one day without. Oh I'll be late, just slip away, never to roam and one day without. Whenever you want enough. I could never get enough." Vocally he nailed this one. Sounded just as good as the recording. A nice round of applause at the end.

#7 — Houses
Opens with a plucky bell/piano tone that's unlike anything heard on a Sunny Day album. At this time I begin to realize that after half and hour into the set the stage is still visually clear. Usually around this phase of the show the performers are hiding behind a cloud of nicotine. Congrats to the kiddies. This was the most smoke-free show I've ever attended at this fine establishment.

#8 — Chain, #9 — New Song
"Chain" opens with a keyboard riff that would make Styx proud and maintains the classic rock atmosphere. While "New Song" is their most rocking, driving, poppy song yet. The lead guitar boasts a twangy tone.

#10 — Heaven
Here the band departs while Jeremy moves to the piano to share with us a lovely solo performance. What followed reminded me a great deal of Coldplay's "Trouble" without the pompous balladry. Still more conventional than his solo piano works like, "Shade and the Black Hat" and "Burn." Will chimed in at the concluding cadence with a few hits and closing with a crash cymbal. Some lyrics I was able to interpret went something to the effect of, "The whole world is falling in love you. Can't find the road through. I'm falling in love with you." This one had the crowd swooning at Jeremy's emotional vulnerability.

#11 — Sinatra
This is the current song available for listen on the official web site, so it reaped the second largest applause of acknowledgement this evening. The live version sounds similar to the recording, but kicks into another gear near the finish line. In fact, they rocked so hard Will shattered his snare drum head in the fervent intensity. Jeremy pounded away on his guitar, swaying to and fro as the crowd swayed in unison. A fine choice for a closer. Here's the chorus for this jingle, "Believe in all the good things you keep inside, There is no freedom in life without freedom of mind. I find myself running from fame. Whether or not I'm hunted by circumstance, everyday, rearranging." Is it about Frank Sinatra? You be the judge. They receive a well earned ovation and offer up a thank you and good night. However, the drum tech adjusts the ride as though there is more to come and the monitor engineer remains at his mixing board. Curious…

The disappointed, yet appreciative mass won't let the show end this way as a thunderous and prolonged ovation ensues. Only a few trickle out of the room. Sure enough our heroes return for, "One more," that goes by the name of "Rubber bands." The inevitable Sunny Day requests begin. To which Enigk counters, "It's very similar to Sunny Day."

#12 — Rubber bands
It's a five minute long, rocking instrumental where vocals only come in during the last few bars. The crowd seems a bit indifferent without the vocals to latch onto, perhaps
hoping for a recognizable song to finish the night off with. The boys play with extreme passion none-the-less. Those wishing for an SDRE song will go home dissatisfied as the returning house lights indicate our night with The Fire Theft is through.

I'd really like to hear these songs again to get a better grasp of what they're trying to accomplish. A lot of the songs sounded like seventies prog-rock to me. Who knows if that's what they were actually going after or not. It's difficult to judge after only one listen and at such a high volume. I'm a bit let down that I can't remember any melodies other than those from "It's Over" and "Sinatra." I trust that there are catchy tunes in there repertoire. They just got lost in the live performance. I enjoyed it all regardless. We have a lot to look forward to with these guys. This material should make for an interesting album.