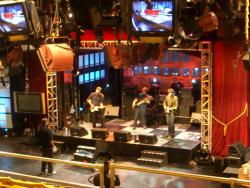 **Disclaimer** This will be an extremely long review considering Death Cab sang only one song.

Last Call with Carson Daly tapes in the same studio as Saturday Night Live, the cleaning lady explains to me, as I wait to be seated in the VIP section. I am actually here to support the Billionaire Boys Club, a Jersey City band, who will be appearing as Carson's house band. Because several of the B-Boys live up the street from me, they have very nicely offered to put me on the list — and since Death Cab for Cutie is the musical guest (hop-scotching through New York to play some European dates), how could I refuse?

I try to figure out a game plan and ponder aloud as to how I can finagle my way to the front of the stage, plopped right in front of Death Cab. The cleaning lady sagely tells me, "If they want you down there, you'll get down there." But am I cute enough to get down there? She gives me a once over before she renders her decision. "You're cute . . . enough!" She then goes on to tell me every SNL detail of the set in front of us — I thank her for the insider-view and she tells me, "I know everything here — I better, after 27 years here!" And she's off.

The VIP section isn't really much of a "section." It's actually just partitioned off, with my last name taped to a chair. But I don't have to wait (and with these shows you can wait forever — to get the ticket, to get on line, to go through the metal detector… you get the point), so I should stop complaining… but I can't. I can't because I am sitting behind (I assume) the biggest Death Cab Fan EVER! She's been scrambling for better seats since she sat down and she and her friends cannot stop talking / screeching.

Carson greets the audience and lays down some house rules before going through his laundry list of guests — "Death Cab for Cutie" getting the biggest response from the audience. Everyone in the audience seems to be here for Death Cab. However, the phrase "Death Cab" gets nary a "woo!" nor a whimper from the over-enthused "woo girl" next to me . . . could this actually be a real, live Carson fan? I thought that Carson Daly Fans were mythical, storybook creatures, like Centaurs . . . or pre-teens. Clearly there is something wrong here. You must be at least 16 years of age to attend this taping!

Later on during the show, I am in for the shock of my life. The biggest Death Cab / Carson Daly fan is actually a Chris Noth (Mr. Big from Sex and the City) fan. She screams "Big! Big!" as soon as she sees him, yelps, whoots AND whoops and is apparently losing control of all of her motor skills . . . she reminds me of someone . . . and when she begs her friend (loudly) to "scream something awful and funny as they go to break" I am overcome with a very bad feeling. She reminds me of me! And I start to question myself: is this how my personal fervor for Death Cab displays itself? Is this God placing a mirror next to me to force me to curb my enthusiasm and mend my dirty ways? I experience fear. Is this considered self-loathing?

It's an hour-long taping and it is so cold in here (all taped shows are cold!). Carson teases the audience by mentioning Death Cab like, at least a half dozen times before show time. And every time he mentions them, the response is Pavlovian — women start to drool, men start to whoop, it's totally off the hook.

Finally, the producer starts to direct "the 'real' Death Cab Fans!" to get out of their seats and walk (not run) to the area in front of the 3rd stage where Death Cab will be performing — and because I'm in the VIP balcony, I can't join said "real fans." I too am a Death Cab Fan, Mr. Producer Man with the Microphone! Just not a lucky one, I guess, because I am stuck watching from afar on the other level — but I get a pretty view of my version of the Fab Four and I am ebullient. Because Meghan's not here to share this very special Death Cab moment, I have to squeal to my neighbor (who I just met) — "Oh my God, they are so cuuuuuute!" Luckily, he is way understanding.

The boys are wearing work shirts and slinging their guitars, ready to go (you guessed it) to work. Unlike me at my day job, they pop up full of smiles and waves and I want to wave back, I really, really, really want to, but I have to learn self-control, so I don't. Instead, I compose myself, I write notes in my notebook, I wait for the first song (and actually "Sound of Settling" is the only song they play, to my (and the audience's) disappointment) — and they rock. Their energy makes my hands warm from all the clapping I'm doing, the only real clapping I've done all night at the Carson Daly show (in all honesty, this is not true — it was a really good show and all the guests were funny and nice, I just say things like that because I think it's funny and am actually a big jerk sometimes).

Ben, Nick and Chris are moving with the song, dancing the patented Death Cab Strut (the one where they see-saw their hips in turn) and I do believe that Chris has channeled Elvis' spirit for this show, because there can be no other explanation as to why his legs are scissoring back and forth, he's going crazy. And I'm feeling crazy… like a fox. Like a strong fox. Like a strong, lusty fox.

So they played just one song. It was a bit of a tease, but I'll see them again when they swing back East. Until then I have my CDs, my pictures and my memories.

**End Disclaimer** This review was only possible with a little help from the Billionaire Boys Club (thanks for hooking me up (www.billionaireboys.com)) and The Door, whose volunteer orientation I missed to attend this taping. The Door is New York City's premier youth development agency, offering unique and highly effective programs for young people ages 12-21. If you're in NYC, please donate your money or your time to www.door.org.