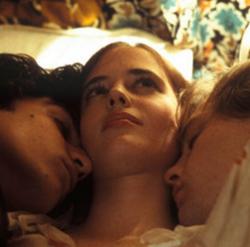 "I was one of the 'insatiables'. The ones you find sitting closest to the screen."

The medium is the message is the medium is the message in The Dreamers, the latest from director Bernardo Bertolucci. Gilbert Adair's adaptation of his own novel (The Holy Innocents) opens in Paris 1968 with American college student Matthew (Hedwig's Michael Pitt) newly arrived and regularly attending screenings at the Cinematheque Francaise. It is here, during a demonstration over the ouster of Cinematheque head Henri Langlois, that he befriends twins Isabelle (Anna Chancellor) and Theo (Louis Garrel). When their parents leave for the country, Michael is invited to stay in their old-world, book-lined apartment. He soon finds that the siblings are uncomfortably close, but his intense attraction to both of them compels him to stay. Soon the three are inseparable, discussing politics and plying each other with movie trivia complete with sexual repercussions for wrong answers.

At once an ode to the films of the French New Wave, a nostalgic remembrance of the obsessive cinephilia that spawned them, a wistful elegy to the era's political attitudes, and an indictment of all of the above, The Dreamers is memorable if ultimately muddled and frustrating. Though Bertolucci is now 63 years old and embarking on his fifth decade as a filmmaker, the film often appears to be the work of a much younger director, with all of the positive and negative connotations that implies.

It is a bravura work that intends to shock, and it is a sad statement that 32 years after the director's X-rated Last Tango In Paris, America is so much more puritanical that this much less provocative return to that city is being released with the equivalent rating (NC-17, in this case). All three actors spend a significant amount of screen time fully naked, but while the occasional close-up of a penis managed to elicit a few gasps and nervous giggles at the screening I attended, the sexuality on display is oddly naïve. Despite Matthew's concern over the true nature of the twins' relationship, they are ultimately revealed to be innocents, overgrown children play-acting their way through life. Their love for film is so all-consuming that it bleeds over to an unhealthy degree into their everyday reality.

This cine-obsession is the true heart of The Dreamers, despite the rampant (and eventually mind-numbing) sex acts. Bertolucci liberally intersperses clips from the landmark films of the period (Godard's Bande A Part and A Bout de Souffle, Bresson's Mouchette, etc.), even bringing in Jean Pierre Leaud to recreate his speech at the Cinematheque demonstration, intercut with actual newsreel footage of the event. (Leaud appears to have carved himself out a niche portraying the specter of his younger cinematic self: witness his similar yet more magical turn in Tsai Ming-Liang's What Time Is It There?) But where Matthew's cinephilia is part and parcel of his voyeuristic openness, the twins live from pose to pose as if constantly under the scrutiny of some omnipresent camera. The streets of Paris are lit like a Hollywood backlot, and the student revolt erupting outside the hothouse apartment windows is undertaken by, as Matthew describes Mao's revolutionaries, an army of extras.

In fact, the frequent political debates between Matthew and Theo are much more a reflection of three decades of hindsight than heat-of-the-moment reaction. This is the film's major drawback: Bertolucci is interested not in depicting real, living characters, but rather in didactically explaining his impressions of the period, with no room for subtlety. He deploys heavy-handed symbolism and long, belabored dialogues with the gusto of a first-year film student. This is unfortunate given his obvious mastery of style; long takes in which the camera glides through the labyrinthine apartment are far more sensual than anything that transpires between the characters. But this seems somehow appropriate given that we are spying on one man's love affair with his medium.