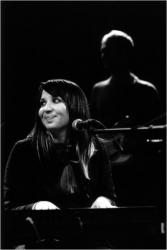 Dear Imaginary Friends, I owe you all an apology; I've been sadly negligent with my imaginary live show writing duties of late. But fret not, I have been musically busy these past weeks, developing my initial indie-album crushes for the year.

Initial indie-album crushes {IIAC} are powerful, and tend to linger. My first two crushes of 2003 — the Postal Service and the Thermals — went on to make my top 10 albums of the year.

Which brings me to my latest IIACs for 2004. 'Tis only January, but I already have two. I'm infatuated with the debut demo from Slender Means. And I think I both love and am inHeather Duby's latest release, Come Across the River on Sonic Boom Records {and yes, I realize the album was released in late 2003. Don't trifle with my love for technicalities!}

Come Across the River features contemplative, lush tracks, with Heather's earthy, sultry alto elegantly laid across quiet strings, simple piano chords, and muted drums. With gracious nuances, her songs profoundly resonate with heartbreak, lovely in their resignation. I've heard comparisons ranging from Mazzy Starr to Kristen Hersh, which are apt — though I hear more of the darkness and hushed eccentricity of Lisa Germano.

I first saw Heather perform on December 30th at the Crocodile, and then saw her play again at Chop Suey on January 16th with Swell. The show at the Croc was breathtaking. On this particular night, snow blanketed downtown Seattle, a rare and beautifully quieting experience, providing the perfect set for the show. Heather took the stage with her impressive band, which included long-standing collaborators Bo Gilliland on bass, Eric Akre on drums, and Steve Fisk on nearly everything else (keys, samples), as well as glorious backup vocals by Carrie Akre — yes, the Carrie Akre of Goodness and Hammerbox fame.

Heather's voice on the album impressed me; live, it was breathtaking, approaching transcendent.

The live show made it evident that these songs have been carved out of great heartache. It occurred to me that Heather Duby is a Seattle blues singer. I've always thought the musical genre known as "The Blues" was a misnomer; in my moments of deepest sadness, I have never found an ounce of solace in those wankery guitar riffs or postured vocal stylings.

Unlike traditional sultry Southern blues, with its twangs and warbles, Heather sings of sadness the wise Northwest can understand: the inevitability of densely clouded heartbreak, drizzly loneliness, and overcast solitude. She makes these themes resonate with beauty, aptly conveying her sad themes with both remorseless detachment and gorgeous regret, such as the chorus to "The Rare Vavoom", "And if you ever have changed your mind / You know it's better to stay resigned / I've made my offer for the last time / Don't look to me when you change your mind."

I just realized, in typing this, that the lyrics above might come across as bitter; I fear that someone not familiar with the music might picture those lyrics delivered in a fury, with a bite. The opposite is true: Heather doesn't whine or deliver diatribes. In fact, the overall tone of her songs borders on impassive; it's like Heather has already been through the shite, she's howled to the moon, she's stared at the walls for days, and now she's relaying what she knows: not for sympathy, not for catharsis, but simply for the beauty of disclosure. She reveals wisdom without preaching or sentimentality — and even while she tries to untangle herself from emotion, she starkly and honestly acknowledges that she can't, because she's too wise.

Honest and reflective, stark and sublime, Heather Duby and her incredibly talented band gave one of the best performances I've seen in years, as gorgeous and quiet as December snow or January rain. Those of us who live here in the Northwest know of the inherent beauty in our quiet grey winters — they allow for a still contemplation impossible to reach in the sunshine. It takes great courage to acknowledge despondency, and great subtlety to resonate it in music. Allow Come to the River to provide you with intelligent, exquisite consolation.

Oh yeah, as for that show at Chop Suey? The sound sucked. If you were there, go see Heather Duby again, in a more intimate setting. See review above for details.