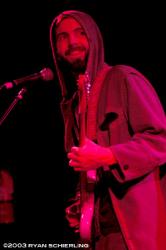 Yo yo, listen up: Biography of Ferns are a three piece pop-punk band {or as they call themselves, a "three-piece indie post-punk band"} formed in these here Seattle parts back in 1998. What do they sound like? Think of a Malinks/A-Frames hybrid, with a nod to influences like Pavement and Primus — plus a dash of cumin and a bag of Pirate Booty… and on at least one song, a heavy splash of shoegazer-y goodness.

The trio featured Justin Hamacher on vocals that ranged from deep-fried-deep to a tenerous pierce all the way up to near falsetto. Larry Biely played an evocatively predominant bass, and Brett Andrew Rudy pounded some fierce drums, and had groovy stellastarr*-esque mirrored shades on throughout the set.

Does anyone else think Justin looks like a young indie-rocker Kenny Loggins in a hoodie? (and I mean that in the nicest, cutest pre-Footloose sorta way…)

I heard a bit of elementary Pavement. They had the overtly minimalistic instrumentation, Stephen Malkmus-groggy in the vocals, and a less-than-calculated disjuncture to their songs.

But as local music fans and readers of our site know, Seattle is no stranger to good local music. Here's what's unique about BoF {Do you friends refer to you as BoF? May we call you BoF…?}…

They have goals! They have a mission statement!

Goals/Mission {as submitted by our new friends BoF}:

Other interesting tidbits: Bof were listed as one of the five up-and-coming bands of 2002 by John Richards, and their song "John the Barber" will be featured on the 2004 Kill Rock Stars compilation {we're assuming they're not the same John, right guys…?}