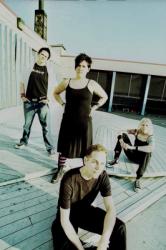 I love women. I love women so much that if I were allowed to love only one thing for the rest of my life, it would most certainly be women. And I especially love women who like to rock (mostly because they are more likely to love me).

It can therefore be easily concluded that when Aradia held their Rock 4 Choice Benefit at Consolidated Works on December 10th, I was there. I was there to see women rock, and I left with plenty to sing about. Oh, women, how do I love thee? Let me count the ways: